There is no specific energy efficiency or reduction target for the transport sector, however, the EU’s European Green Deal and the Climate Law set a target of 90% transport decarbonisation by 2050 compared to 1990 levels. Additionally, the Effort Sharing regulation sets individual CO2 reduction targets for all non-EU ETS sectors (transport, buildings, agriculture, non-ETS industry and waste), for each Member State based on their economic circumstances. These are the most ambitious targets and directly link to the Paris Agreement (through the EU’s Search Results Nationally Determined Contributions NDC commitment). 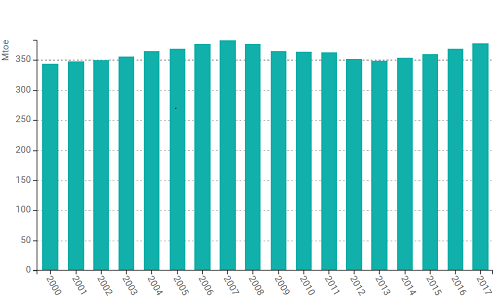 With the exception of the EED, most policies focus on greenhouse gases (GHG) rather than energy. While these are linked, they are not the same, especially in transport. The CO2 standards could be met by a variety of vehicle technologies, but each would have different implications on energy efficiency. This is because some zero emission technologies (e.g. electric, hydrogen and biofuels) raise energy consumption.

To meet these emission and energy goals, transport systems across the EU require transformation. It is therefore essential that effective policies are implemented to support this transition. Robust evaluations are crucial to understand how effective existing policies have been and to facilitate improvements in effectiveness for transport policies in the future.

According to the MURE database, only 130 of 547 (24%) transport measures in the EU have been evaluated in some way, and only 107 (82%) of these included quantitative estimates of GHG emission impacts (2018). This policy brief therefore provides an introduction on options and methods for evaluating the effectiveness of transport policies.

There are a number of aspects to consider when reviewing transport energy consumption. Traditionally, the use phase (e.g. when a vehicle is being driven) has accounted for the most significant proportion of a vehicle’s energy consumption and GHG emissions. However, as the automotive industry has moved towards alternative fuels, other phases are becoming more important. These include the production of vehicle and fuels and disposal phases. An electric vehicle’s impacts, for instance, will depend on the energy (and carbon) intensity of the electricity supply used to run the vehicle and used in the electricity intensive battery manufacturing process.

The A-S-I Approach describes the three key policy types which seek to improve energy efficiency in the transport sector (ELTIS, 2014):

According to the MURE database, the majority of transport policies aim to support modal shift to public transport or improve inter-urban and urban traffic management. Regarding improve policies, over half of the measures in MURE aim to promote cleaner fuels (MURE 2020). These trends are understandable, as several policies may be needed to encourage successful shift from multiple other modes, whereas technological improvements can be controlled by setting just a few binding industry standards. Avoid policies tend to fall within the jurisdiction of urban planning, IT or employment policies. Therefore, shift and improve are most relevant to consider in transport policy.

A wide range of evaluation methods can be used to estimate the GHG effects of policies and actions. They can broadly be grouped into two categories:

Bottom up and top down methods are complementary. Top down provide total savings and bottom up provide the policy’s attributed savings. The nature of transport policy, especially for cars, highlights the importance of both approaches. As many policies focus on cars, thus evaluations tend to focus on packages of measures. Technical driven savings are easier to evaluate (e.g. using stock modelling) whereas modal shift policies are more complex for bottom up methods

Table 1 presents MURE’s categorisation of evaluation methods into bottom-up, top-down or a combination of the two. It also shows their frequency of use across the 30 countries who contribute to the MURE database. Hybrid methods appear to be the most common, with 78 evaluations utilising these types of methods. Econometric modelling (top-down) is less common with only 6 studies reported in the MURE database.

Table 1 Evaluations methods and number of evaluations that feature them in the MURE database (contains submission from EU27 countries + Norway, Switzerland and UK) (source: http://www.measures-odyssee-mure.eu/)

The following section presents two best practice applications of evaluation methods well-suited to reviewing energy impacts and trends in transport. The first is an econometric (regression) analysis, which, according to MURE, is used infrequently. The second example is a decomposition analysis, which is a top-down method which can be used to study trends in energy demand of a sector or sub sector.

Box 1 below contains a case study of econometric analysis applied in an evaluation of an EU-level transport policy.

Method: The impact of the regulations was assessed using an econometric approach. This involves understanding variables connected to the impacts and identifying those which are dependent on the regulation. The analysis then aims to quantify how a dependent-variable changes when one of the independent variables (i.e. explanatory variable) is varied while the other independent variables are held fixed. Therefore, the analysis removes the impacts of other factors that may have had an impact on emissions from new vehicles, so that only remaining change in CO2 emissions can be attributed to the regulations.

Factors effecting CO2 reductions related to the policy, were categorised as: a) Time dependent variables; b) Outcome variables that can impact on the outcome of analysis (e.g. CO2 emissions of new cars/LDVs) but are not a direct consequence of the regulations. c) Omitted variables that correlate with the policy but are not casually linked (e.g. consumers’ preferences). d) Anticipation variable reaction to policy by key actors1. The final change observed in emission and energy usage was adjusted by removing these variables. The remaining change observed can then attributed to the policies.

Results: The results suggest that around two-thirds of the reductions observed since 2009 can be attributed to the Regulation. Specifically, 65% of improvements in energy efficiency was attributed to the Regulation (equivalent to 3.5 gCO2/km). Whereas, autonomous improvement led to a 33% (~1.6 gCO2/km) reduction. These results indicate analysis indicates that the regulation has been more successful in reducing emissions than the voluntary agreement that was previously in place.

Decomposition analysis methods ‘decompose’ a target variable into pre-defined factors and then determines their contribution to the overall target value. These drivers do not necessarily directly relate to individual policies; the impacts of a specific policy are only indirectly visible through the changes in the drivers (see Box 2 below).

Decomposition analysis is conducted as part of the ODDYSSEE-MURE project, and available via an online tool. The objective of this tool is to explain the variation of the energy consumption over a given period through a decomposition into certain factors. This case study will focus on the transport results only.

Method: The pre-defined drivers of energy consumption in decomposition method are activity (i.e. km-passenger or km-tonne, modal shift (i.e. the structure of transport split by mode), efficiency (or energy savings consumption per passenger or tonne kilometre by mode) and ‘other’ effects.

Results: Energy use since 2000 in transport was found to have increased by 34 Mtoe. This change in energy consumption is attributed to the identified key drivers in Erreur ! Source du renvoi introuvable.2. Activity increases in passenger (including international aviation) and freight transport contributed an additional 79 Mtoe. This effect was counterbalanced by energy savings (i.e. improvements to the efficiency of vehilces) which contributed to decrease the energy consumption by 57 Mtoe. Other effects (e.g. ‘negative savings’ in freight transport due to low capacity utilization) increased the energy consumption by 7.9 Mtoe. Modal shift had a minor increasing effect of about 4.3 Mtoe, 4.1 Mtoe of which occurred in freight transport. This impact is likely to be smaller than what would have occurred without policies avoiding shift to less efficient modes, indicating some level of success from these policies. Additional (bottom-up) analysis would be required to attribute this to individual policies.

Figure 2 changes in final energy consumption of transport between 2000 and 2017. 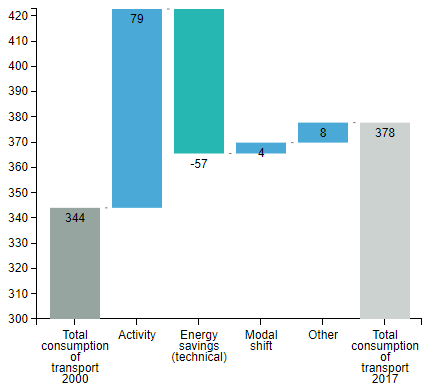 The table below compares the characteristics and applicability of the two methods.

Decomposition and regression analysis are just two examples of methods that can be used to understand the impacts of policies on energy consumption. Given the increasing energy demands in transport, it is essential that these methods and others are used to understand how effective existing policies have been in tackling this issue. 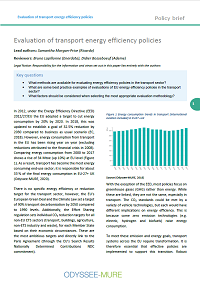