A mix of regulatory and economic measures is the appropriate policy response for improving energy efficiency and decarbonising road transport.

Transport is globally the fastest growing sector in terms of final energy use and carbon emissions. Even in Europe, despite its comparatively high share of public transport modes, transport is the only economic sector whose greenhouse gas emissions have increased since 1990, whereas all other sectors have achieved reductions in their emissions1. Road transport represents a very high share of these emissions, and radical decarbonisation of the sector (to be achieved through low fuel consuming cars and alternative powertrains and fuels with low or zero carbon emissions) seems to lie many years ahead. Improvements in energy efficiency of light and heavy duty vehicles are cancelled out to a large extent by increasing demand for passenger mobility and freight transport. Declining levels of energy consumption during the last years were due to the economic stagnation in European countries, which has led to stabilising or even decreasing passenger and freight transport demand. This temporary trend, however, can easily be reversed if economic growth rebounds.

The main policy responses for improving the energy efficiency of road vehicles in Europe have been the introduction of carbon dioxide (CO2) emission standards for cars and vans (as CO2 emissions are proportional to fuel consumption for a given fuel) and several attempts to promote public transport modes, active mobility and Ecodriving and to reduce demand for passenger car travel, especially in urban areas. A special report prepared in the frame of the Odyssee-Mure 2012 project describes in detail the trends in energy consumption and the numerous examples of policy initiatives promoting a modal shift away from passenger cars2.

Another reason for the persisting high energy consumption levels is that fuel consumption and CO2 emissions of vehicles have not been reduced in recent years as much as shown by official statistics. It has been well known to experts for some years now that official data, e.g. those shown in Figure 1, underestimate real-world fuel consumption and emissions of cars because vehicle tests are conducted with inappro-priate procedures that do not reflect today’s actual driving conditions and enable automakers to exploit ‘flexibilities’ to yield artificially low emission results. 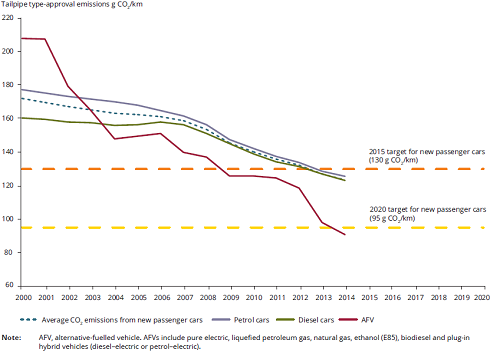 This issue has become more prominent since the occurrence of the ‘dieselgate’ scandal. In September 2015 the U.S. Environmental Protection Agency announced that it started investigations against an automaker for illegally installing software that allowed some diesel-powered vehicle models to pass stringent emission tests for type-approval, although their on-road performance led to much higher emissions. The scandal referred to emissions of nitrogen oxides, an air pollutant that causes serious health problems. However, the same discrepancy holds for fuel consumption and carbon emissions: As Figure 2 illustrates, on-road CO2 emissions of cars that entered the European market in 2014 were 40% higher than their formal test emissions, while this gap was less than 10% in the early 2000s.

Figure 2: Difference between real-world and officially reported CO2 emissions from new cars in Europe, according to different studies in European countries 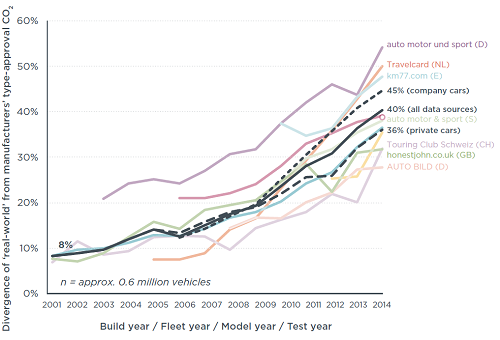 Reacting to the ‘dieselgate’, environmental experts and policymakers declared that the regulatory regime of vehicle emissions has to be tightened, especially in Europe: Automakers’ compliance with legislated emission standards must be adequately monitored, and an emission test that is representative of real-world driving conditions should be introduced. This raises the question whether more stringent (and more costly) regulatory measures are the only possible response to the scandal. Are there alternative or additional policies worth examining?

Regulatory standards on energy efficiency and emissions are especially popular among engineers. They claim that, since a technological solution is available, legislative enforcement is an effective means to promote technical progress and achieve energy and environmental objectives. Policymakers around the world have mostly adopted this approach because it is effective and politically acceptable.

However, economists do not share the same view towards ever stricter regulations and enforcement mechanisms. Without questioning that regulatory policies can indeed be effective, their analysis of many real-world examples shows that economic incentives are more cost-effective, i.e. may achieve the same energy or environmental benefit at a lower cost to society because they do not distort the preferences of consumers and firms as much as standards do. A mandatory standard may have been ill-conceived by bureaucrats and turn out to be too stringent and hence costly to the industry; or too lenient, thus favouring some polluters, which may even have an influence on the definition and stringency of the standard. A regulation may also be costly to enforce because it requires resources (in the form of staff, equipment etc.) to ensure enforcement compliance.

To overcome such challenges, the economic approach is to impose an economic penalty to the undesired activity (i.e. energy consumption or emissions) and let the market adjust – e.g. by investing in more energy efficient equipment, or preferring to pay the additional tax if this is cheaper to a polluter. The new market equilibrium, according to economic analysis, will be beneficial to society by leading to the economically desired solution and decreasing the harmful activity as much as is necessary to ensure cost-effectiveness. Legislated standards are justified only as a ‘paternalistic’ policy whenever consumers are imperfectly informed or inattentive when purchasing energy-using goods. Standards can address such imperfections by limiting the options available to consumers in the market, thereby preventing them from buying light bulbs, electric appliances or cars with ‘too low’ energy efficiency. There is, however, detailed theoretical and empirical economic analysis which shows that the size of such biases is not sufficient to justify several ‘paternalistic’ energy policies (such as fuel economy standards) implemented in the U.S. in recent years3.

Seen from a certain perspective, ‘dieselgate’ may confirm economists’ concerns. Economic instruments seem to be appropriate to limit fuel consumption and CO2 emissions of vehicles: An additional carbon tax (amounting to a tax per litre of fuel), or a vehicle tax based on carbon emission levels, can encourage people and firms to purchase low-emission vehicles, to drive less with their cars and to drive more economically, in order to reduce their fuel bill. This means that a proper economic measure promotes a wide range of behavioural responses that can improve the environment. Conversely, an emissions or fuel economy standard encourages the purchase of low-emission cars but does not induce drivers to drive less – in fact it may encourage them to drive more with their more efficient cars, thereby reducing net energy savings. Many economic studies4 conclude that fuel economy standards involve higher social costs and hence are inferior to a fuel or carbon tax.

So, could the ‘dieselgate’ trigger a partial phase-out of regulations in favour of additional market-based mechanisms such as those mentioned above?

There is no single winning strategy here; reality is more complicated than the world of textbooks. First of all, regulatory standards are often the only realistic solution in an environment that is politically unfavourable to taxes. If we must act soon to curb automobile fuel use, anything that is politically feasible is preferable to measures that are economi-cally superior but difficult to implement. Second, some market-based policies are costly to implement – for example, emissions trading or congestion charging involve initial administrative costs.

Third, it is important to keep in mind the imperfections associated with investment decisions made by consumers and firms. Humans are neither perfectly informed nor perfectly rational, and they face several limitations of both economic and practical nature. Depending on how large these imperfections are – which is still a matter of research – a regulatory energy efficiency standard may indeed be preferable to price-based signals that might be neglected by consumers.

Moreover, at least some of the economic instruments are subject to cheating as well. Several taxation schemes for vehicles calculate tax levels on the basis of an officially reported energy consumption or emissions figure. These figures are the same with those used for legislated standards, hence the same caveats apply to such market-based policies.

More emphasis should be given in the future to additional economic incentives for phasing out inefficient and highly emitting vehicles. Environmental tax reforms (e.g. carbon taxation or emissions trading) and other market-based instruments (e.g. distance-based vehicle charges) are accepted by international organisations such as the OECD and the International Monetary Fund as necessary ingredients of sustainability policies. But in a complex and imperfect world, a mix of regulatory and economic measures remains the preferred policy response to global energy and environmental problems. The appropriate ‘quantities’ of this mix (how strict standards and how high emission taxes) has to be assessed in each case by weighing the social costs and benefits of each policy option. 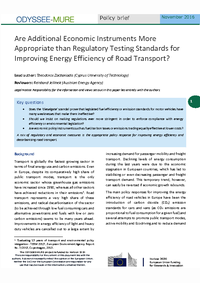