This brochure proposes an evaluation of energy efficiency progress achieved by mode in transport since 2000, with a focus on cars for which significant progress has been achieved. It shows the great impact of the economic crisis on the energy trends.
It also looks at the EU and national policies and measures implemented in that sector: the majority of them concern passenger modes and especially cars. It analyses in depth measures on modal shift and those concerning non-conventional fuels.

Energy Efficiency Policies in Transport in the EU: October 2012 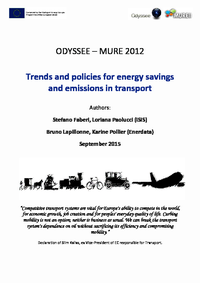