Energy savings in transport lag far behind those in other sectors. 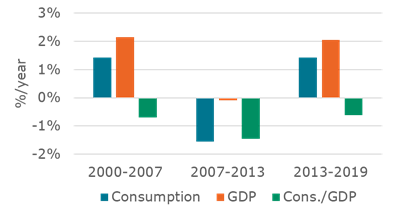 Figure 2: Trends in transport energy consumption and GDP over 2013-2019

The modal split of consumption has only changed slightly between 2000 and 2019: cars account for 53% and road freight transport (trucks and light duty vehicles) for 31% (Figure 3). Therefore, the analysis of energy efficiency trends will focus on road transport. 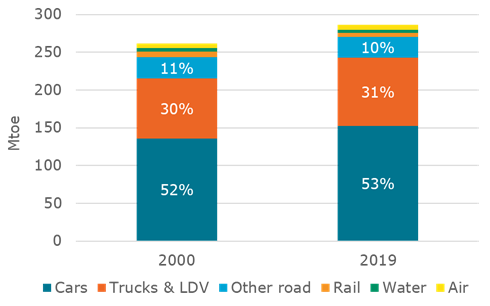 Consumption of domestic air transport and cars is growing since 2013 much faster than before the financial crisis (3 times faster for air, 50% faster for cars). In contrast, consumption of trucks and light commercial vehicles is only growing at half the rate it did before 2007.

Regular decrease of the carbon emission factor between 2004 and 2012

CO2 emissions from transport followed consumption trends. A decoupling can be noted between 2004 and 2012 due to a steady decrease in the carbon emission factor (tCO2/toe), thanks to the penetration of biofuels (from 0.7% of the energy mix in 2004 to 5% in 2012 and 5.5% in 2019); the situation has stagnated since then. Electricity share is around 2% and slightly decreased since 2000. 3

Increase in specific CO2 emissions of new cars since 2016

Measures on new vehicles have been the main policy tool to reduce CO2 emissions in transport, combining European standards and labels on specific emissions (gCO2/km) and national measures (fiscal and incentive). At EU level, emissions from new cars fell by 16% between 2010 and 2016 but have since increased, mainly due to the higher share of SUVs. The target for 2021 (95 gCO2/km) is unlikely to be met and the targets for 2025 and 2030 remain ambitious (Figure 4). The situation is similar for vans. 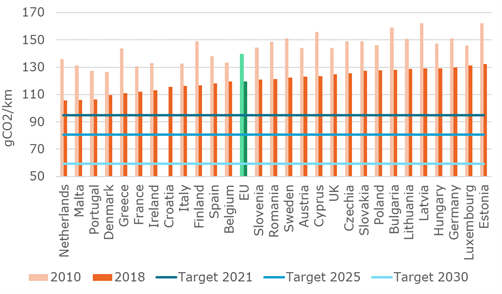 New cars are less efficient since 2014

Different indicators can be used to assess the fuel efficiency of cars depending on the definition chosen. Their technical efficiency is best represented by l/100km, and their overall efficiency by koe/pkm4, which takes into account the effects of load factor and fuel mix. The specific fuel consumption in l/100km may refer to test values for new vehicles or to values observed in real-life driving conditions and fuel composition. 5

The specific fuel consumption of new diesel and gasoline cars has decreased everywhere until 2014, especially over 2007-2014 (Figure 5). Since then, a reverse trend has been observed in most countries, and a clear slowdown in the others, due to a decrease in the share of diesel cars (from 56% in 2012 to 34% in 2019 at EU level) and an increasing share of SUVs (from 25% to around 40%).

Figure 5: Trends in the specific consumption (l/100km) of new cars 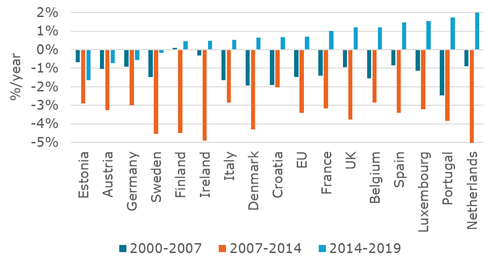 Source: ODYSSEE, based on CO2 emission data from EEA6

At EU level, the actual fuel consumption of the car stock follows the trend of new cars with a lag: it has continued to decrease since 2014, a very different trend from that of new cars. A simulation of the test value of the car stock, based on test values for new cars, estimates the gap between test and actual values to be around 10% in 2018 and this gap is widening. Focusing on overall efficiency (koe/pkm)7, progress has been small since 2014 (0.2% per year). Technical efficiency has improved by 0.4% per year, while the decrease in car occupancy has contributed to lower efficiency progress by 0.3% per year; the change in fuel composition has had a limited effect. Prior to 2014, the overall efficiency improvement was similar, though with faster technical improvements (0.8% per year), partly offset by lower car occupancy and the effect of fuel mix.

Countries show contrasting situations (Figure 6). The energy efficiency of cars has improved considerably since 2000 in some countries (Greece, Switzerland, Italy, Ireland). Half of the countries have improved their results since 2014. 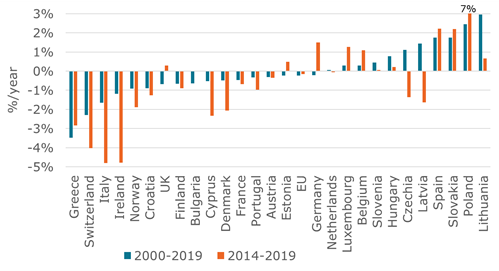 In most countries, the unit consumption of road freight transport (trucks and light commercial vehicles) has decreased since 2000, reflecting improvements in energy efficiency; at EU level, it has decreased by 0.8% per year. It has however increased in seven countries (Figure 7). 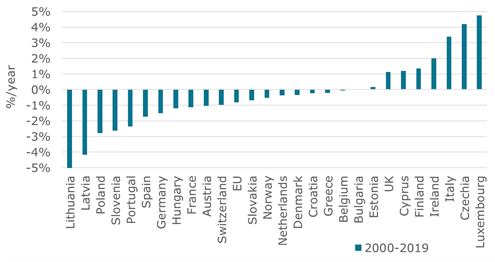 Energy efficiency improved by 10% since 2000

Since 2000, energy efficiency in transport has improved by 0.6% per year in the EU, i.e. by 10% compared to the 2000 level (Figure 8). Greater progress has been achieved in domestic air transport although there has been a stagnation since 2008. Progress stopped for trucks and light vehicles between 2008 and 2012 due to less efficient operation of trucks (less loaded or even empty running) because of the financial crisis, but it is back. There is no further progress for cars since 2013.

Figure 8: Energy efficiency progress in transport in the EU13 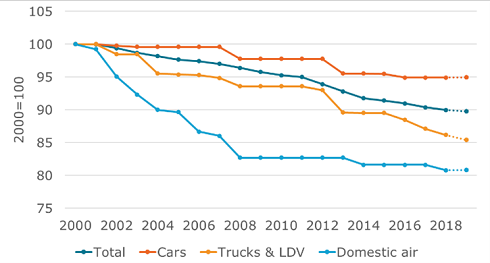 Energy efficiency progress has enabled additional savings of around 1.5 Mtoe per year on average since 2000, and even 2.3 Mtoe per year over 2008-2013, i.e. twice as much as since 2014. Cumulated since 2000, these savings have reached 28 Mtoe in 2019, i.e. 10% of transport consumption: without these savings, transport consumption would have been 10% higher. Trucks and LDVs are over-represented, accounting for half of the savings, well above their share of consumption (31%). Conversely, the share of cars in savings is much below their share in consumption (26% vs. 53%), which is all the more surprising as most measures target cars (and more recently LDVs).

At EU level, the share of rail and waterways in freight traffic has fallen by 4 points since 2000, from 28.5% to 24.6%. Indeed, this share has declined in 19 Member States since 2000. The downward trend has been slower since 2010 (-1 point at EU level). A few countries have experienced a significant shift from road to rail and water, including Italy (+19 points thanks to the sea motorways), Czechia (+7 points since 2010), Finland, Spain and Denmark (+3 to 4 points). Latvia and the Netherlands are leading with a share above 50% thanks to good quality rail lines to ports, combined with high maritime traffic for the later.

Figure 9: Share of rail and water in freight traffic (%) 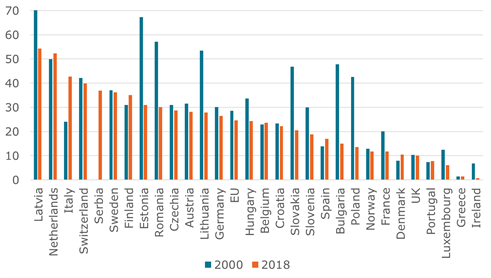 The modal split of passenger traffic is stable 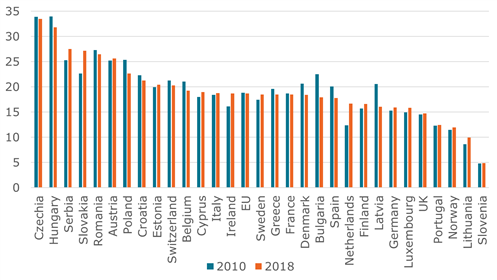 Energy savings do not offset the traffic growth

Between 2014 and 2019, the traffic increase (activity effect) contributed to raise transport consumption by around 23 Mtoe. The growing share of trucks in freight traffic and, to a lesser extent, of cars in passenger traffic (modal shift) also contributed to increasing consumption (by almost 2 Mtoe). Energy savings only offset a quarter of these effects, thus limiting the rise in consumption to 20 Mtoe (Figure 11). Since 2000, transport consumption has grown by 25 Mtoe. Energy savings (28 Mtoe) have compensated half of the activity and modal shift effects (by respectively 46 Mtoe and 5 Mtoe). 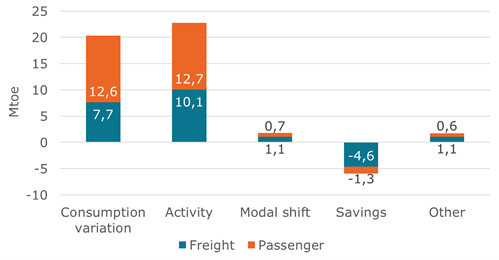 Energy efficiency progress for new cars has slowed down or even stopped and reversed since 2014, due to the rising number of SUVs and the declining share of diesel cars. Progress for the car fleet is very low in most countries, and far from the theoretical performance of new vehicles, which does not take into account real driving conditions and the increasing share of biofuels. Trucks and LDVs perform better and account for half of the total energy savings in transport, well above their share in consumption (31%). The objective of increasing the share of efficient modes of transport (public transport versus private cars, and rail or waterways versus trucks for freight) is far from developing positively, except in a very few countries. All these factors explain why consumption and CO2 emissions have returned since 2014 to their pre-financial crisis trend. 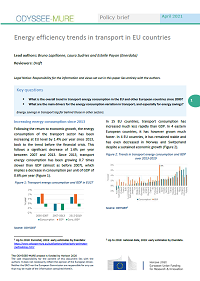