Technology procurement groups and networks (from October 2016 for technical reasons renamed Innovation clusters) were introduced in Sweden in the late 1980s. Through the years, their number has increased and their tasks have been somewhat modified, but their main purpose continues to be to bring together several actors in a particular building-related field together (such as landlords of commercial spaces) with the aim of increasing procurement skills through collective action. This stimulates the emergence of new systems and products for energy efficiency in the market. Moreover, the procurement groups actively promote their role as meeting places for the exchange of ideas and development of methods.

The Swedish market for apartment rental is heavily regulated, in contrast to the rental of commercial spaces. As a rule, the landlord who owns a whole block of flats, is responsible for the supply of heating and hot tap water. The cost for these is included in the fixed rent. Thus the incentive for energy efficiency lies with the landlord.

Additionally, some appliances, such as refrigerators and stoves, are provided for by the landlord, but the household electricity is paid by the tenant. Here the incentive for energy efficiency lies with the tenant.

There are very few apartments for rent outside this structure.

Another particularity in the Swedish buildings sector is the widespread use of district heating. In general, all multi-apartment buildings and commercial and public sector buildings in towns and cities are heated by district heating. Heat arrives in the building usually through one single connection with the network and can thus not be regulated by tenants, i.e. all apartments in an apartment building get the same amount of heat. Thus, energy efficiency becomes the responsibility of the owner of the entire building. Only in a few cases a tenant controls the connection with the district heating network, such as a government body renting the whole building.

In the early days of procurement groups, the working methods of the groups were more regulated and more strictly focused on procurement only, but with growing experience and the emergence of new groups, flexibility has increased significantly.

Currently, six procurement groups are operating. They are:

The various procurement groups are described in detail below. Further details are available on MURE database as HOU-SWE23 and TER-SWE20.

The main purpose of BeBo is to reduce energy consumption for heating and electricity in multi-apartment buildings using coordinated procurement to stimulate the early market entry of new products. As was previously mentioned, in Sweden landlords are, as a rule, owners of whole blocks of flats instead of individual apartments. The landlord provides each apartment with heating and hot water. The tenants pay so called “warm rent”, i.e. heat and hot water is included in the rent (but not the use of household electricity). Therefore, the incentives for energy efficiency lie mainly with the landlord.

So far, activities within BeBo have focused on refrigerators, freezers, washing machines, dryers, ventilation, lighting in stairs, food processing, and electrical engines. Reductions in energy use and annual costs reaching 30 – 50 per cent have been recorded in certain product categories.

Participating landlords/companies can implement full-scale demonstration projects in their properties, with financial support from the Swedish Energy Agency.

Within the framework of BeBo, reduction in energy use has to be proportional to the costs, i.e. energy savings must exceed long-term costs. Only actual savings count, which are measured against energy consumption under real operation.

Currently, BeBo runs a specific project called “Rekorderlig renovering” which aim to find methods for deep-renovation resulting in a 50 per cent reduction of energy purchased for buildings. By 2016 more than ten demonstration projects have been carried out with promising results, though further demonstration is required.

More information can be found on www.bebostad.se (in Swedish).

The procurement group for owners of commercial premises, BeLok, consists of 21 major landlords, in both the private and the public sphere, representing 25 per cent of total commercial floor area in Sweden.

Unlike the apartment sector, renting commercial space is not strictly regulated in Sweden.

The task of BeLok is to carry out tests on new methods, products and systems and to disseminate the results.

BeLok currently uses the concept of « Totalmetodiken » whereby individual measures are integrated into a larger package. This method tends to increase the cost effectiveness of deep energy efficiency measures. The starting point is a thorough analysis of the building prior to any action.

In 2014, there were 260 buildings of various kinds (hospitals, ice-hockey rinks, schools, offices etc.) where this method was carried out, leading on average to savings of 30 – 60 per cent, with a profitability of 15 per cent, i.e. cost reduction due to energy saved exceeds costs for the action over a pre-defined payback time. Today the number of premises renovated this way is estimated to be far greater.

More information can be found on www.belok.se.

LÅGAN differs to some extent from the other groups presented here, because it is strictly speaking not a technology procurement group, but a collaboration platform for the stimulation of construction of buildings with very low energy consumption, both for entirely new buildings and buildings undergoing deep renovation.

LÅGAN, which started in 2010, is a collaborative project between the Swedish Construction Federation, the Swedish Energy Agency, Region Västra Götaland, research funding agency Formas, and others. LÅGAN aims to encourage new thinking and to speed up construction of, and conversion to, energy-efficient buildings.

A recent evaluation shows that LÅGAN has achieved substantial and valuable results. It has made it easier and safer for different actors involved in the process to plan and construct low-energy buildings. Because the building sector is characterised by long lead-times (i.e. the time between the start of a project and the reaping of the benefits), further effects are expected in the future. Also collaboration between various actors in the process has been enhanced.

More information can be found on www.laganbygg.se.

HyLok is a network comprising of ten government bodies with the aim of providing a good example for other public authorities on how to promote energy efficiency in their internal activities. Most public authorities rent their premises and thus they need to negotiate with landlords on energy efficiency measures. Therefore, the exchange of experiences and new ideas becomes vital, especially in meeting the requirements of the article 5 of the Energy Efficiency Directive, on public buildings. But HyLok also addresses the more general need to carry out the tasks of public authorities in an energy-efficient way.

Although HyLok itself consists of a fixed number of public authorities, any government body or other public authority can participate with ideas or learn from what has been achieved within the network.

HyLok collects statistics from its participants in order to design baselines for energy use. Moreover, it produces check-lists and takes the role of being « test-beds » for new ideas.

BeSmå is a recently established procurement group for producers of individual family houses, currently consisting of five companies. The aim is to reduce energy consumption of both new and newly renovated single-family houses by:

The projects include pre-studies, communication, knowledge-enhancement and demonstration.

BeLivs is a network for cooperation among owners and tenants of commercial spaces where food is stored, processed, purchased or consumed. The target group is defined rather broadly and includes for instance shops, storage facilities, petrol stations, kitchens, and bakeries.

BeLivs focuses on energy efficiency as such, but in particular freezers and air-conditioning.

All premises in the food supply chain are particularly challenging from an energy consumption viewpoint. Projects carried out so far show that energy efficiency requires coordinated installation and operation of heating, cooling, freezers, and air-conditioning with common monitoring systems.

Similar to the other procurement groups, BeLivs works through the exchange of ideas and demonstration projects.

More information can be found on www.belivs.se.

In 2013, the Swedish Energy Agency estimated the total quantitative impact of technology procurement groups and found that the combined annual effect of the two groups operating for the longest time, BeLok and BeBo, was approximately 0.06 TWh. Total annual energy consumption in the Swedish building sector is approximately 155 – 165 TWh. The figure for BeLok and BeBo is not particularly high, but assessing the effects depends on several factors which are very difficult to estimate because the groups give priority to long-term developments such as knowledge production, which might produce results only many years after a particular initiative is taken. It is also very difficult to show a clear connection with actions today and the initial actions in the networks. However, the popularity of the networks indicates that the participants value them, which is supported by the fact that the number of technology procurement groups has gradually grown.

The idea of technology procurement groups is not specifically tied to particularities of the Swedish system and therefore the concept should be transferrable to other countries. 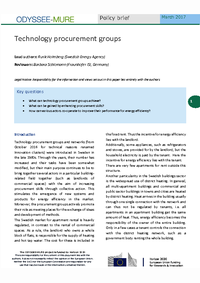