Home > Publications > Policy briefs > How are the Swedish taxes on energy and carbon dioxide related to energy efficiency?

The foundation for Swedish energy efficiency policy is a tax on carbon dioxide and energy.

Tax on energy and emissions of carbon dioxide constitute the backbone of Swedish energy efficiency policy, both directly by reducing demand, but also indirectly, because they are often the key drivers for other policy instruments. However, the taxes were not originally introduced solely for energy efficiency purposes. In fact, in some cases, energy efficiency followed only as a side effect.

Sweden introduced a general tax on energy in the 50’s, the purpose of which was primarily fiscal, although also concerns about the import reliance on oil played a certain role, too. During the oil crises in the 70’s, the energy tax came to be perceived increasingly as a policy instrument to save energy and to switch to other energy carriers than oil, especially electricity, in which Sweden was self-reliant.

In the early 90’s a carbon tax was introduced on fuels, with the explicit aim to reduce emissions. The tax rate is set according to the amount of carbon dioxide emitted per unit of each fuel. The general carbon dioxide tax is SEK 1.19/kg (€0.12/kg) based on the carbon dioxide content of each fuel, but in order to make this figure easier to comprehend, the energy taxation act breaks this down into tax levels for each individual fuel.

In addition to this, there is also a tax on electricity. Significantly lower tax rates are applied for Northern Sweden, where the climate is colder and therefore heating expenditures higher than in the rest of the country. Certain sectors, primarily industry but also agriculture, only pay the minimum rate stipulated by the energy tax directive (2003/96/EC).

The energy and carbon taxes and the electricity tax are often referred to under the common heading of “energy taxation”, under which also sulphur tax is sometimes included. The revenues from these taxes exceed 5 % of the central government budget revenue.

Regardless of whether it is called energy tax or carbon tax, and whether the purpose was originally fiscal, energy efficiency or climate mitigation, taxing fuels and electricity tends to reduce overall energy consumption. As such, taxes today make up the core of Swedish energy efficiency policy, because they are often the primus motor for other policy instruments.

Thus, for instance, the municipal energy and climate counsellors who offer free advice to individuals and businesses, are in part a response to the demand for energy efficiency generated by the tax. Similarly, voluntary networks and programs for industry is partially a consequence of the tax, as industries within the same branch share knowledge and experiences to reduce the overall tax burden.

Swedish taxes, the EU-ETS, and the EU tax directive

It has been recognized from the outset that tax levels for industry exceeding those of the EU energy tax directive could have a detrimental impact on the competitiveness of Swedish industry. As a consequence, there are several exemptions for industry, especially industrial installations participating in the European emission trading scheme, EU-ETS. These installations pay only energy tax, but not carbon tax because the price of the carbon dioxide emission allowances is perceived to have a similar effect as a tax. Moreover, “carbon dioxide leakage”, i.e. Swedish companies relocating abroad to avoid these costs, could follow if Swedish industrial installations were to pay twice for their emissions.

Source: Swedish Energy Agency. Note that total tax may exceed the sum of CO2 and energy tax because of a sulphur tax.

From Table 1 it can be seen that in particular tax levels on natural gas and coal in Sweden exceeds that of the Energy Tax Directive by magnitude. This also applies to electricity.

The tax has been repeatedly adjusted to the consumer price index, but otherwise the tax level has remained remarkably stable. There have been, however, significant changes over time regarding which fuels to include in the tax, especially biogenic fuels, where the core question has been for what purpose they are being used. Biogenic fuels are either exempt of both carbon and energy tax or, in the case of biofuels subject to the blending mandate, they are subject to both. Thus, in practice the carbon and the energy tax serve the same function of incentivising energy saving and, outside of the blending mandate, fuel switch.

The tax levels, as a rule, by far exceed the minimum levels stipulated in the Energy Tax Directive (2003/96/EC) except for electricity for industrial purposes, where it is on the minimum level. For example, coal is taxed at a rate exceeding the minimum level by a magnitude of 100. There exist other countries in the EU which have introduced similar taxation as Sweden, but there is no comprehensive study carried out comparing the various tax regimes.

Other effects of the taxes

Thus, the brunt of the effect of the taxes can be observed in the household and transportation sectors. This is clearly reflected in the Swedish implementation of the energy efficiency directive, where the effects of the taxes primarily stem from these two sectors, with a combined share exceeding 80%.

From the 70´s, energy taxes – and later also carbon taxes – have influenced choices regarding both energy use and energy switch. Today they are still one of the key instruments in Swedish energy policy. The taxes have for example contributed to the gradual switch away from oil-fuelled boilers to e.g. heat-pumps at a scale that was unique for Europe. 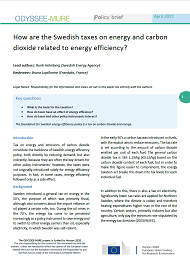