In contrast to the existing taxation of road transport, an efficient pricing system is characterised by higher charges on mileage with fuel consumption being primarily subject to a CO2 levy.

Taxes and charges of road transport in Europe

In addition to a general VAT, road transport in Europe is subject to a series of specific charges. They range from car sales taxes, fuel taxes and road tolls to congestion charges.

European countries all apply their own levy system, which has developed over time, with little coordination between countries. Within the EU, only minimum rates for motor fuels are harmonized under the Energy Directive 2003/96/EC. Additionally, the Eurovignette Directive lays down certain guidelines for Member States that levy tolls and vignettes on heavy goods vehicles (Directive 2011/76/EU).

Figure 1 gives an overview of the current (2016) tax rates (excluding VAT) on non-business, low sulphur diesel (blue columns) and on unleaded petrol (red columns) in the EU27 member states as well as in the UK, Norway and Switzerland. It shows that most of the countries apply a tax rate that is higher than the required minimum (0.330 EUR/L for diesel and 0.359 EUR/L for petrol) and that petrol is usually taxed at a higher rate than diesel.

In Denmark, Finland, France, Ireland, Norway, Portugal, Slovenia and Sweden the fuel tax contains an explicit CO2 tax component, which is the largest in Sweden and Finland, at around 0.2 EUR/L.1

While all countries levy taxes on motor fuels, comparatively few countries apply variable mileage-based charges. Of the 30 countries considered, 17 levy mileage-based charges on heavy goods vehicles (HGV) and 9 on passenger cars (PC) (Figure 2). Typically, these charges are restricted to motorways, vary with weight and emission characteristics of heavy goods vehicles, and are earmarked to finance road infrastructure. The highest charges are levied in Switzerland (HGV) and Norway (PC), where the charges also apply to roads other than motorways. 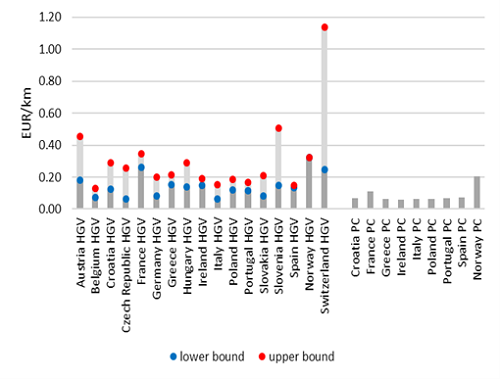 Countries without distance-based charges usually levy yearly charges for motorways. Such vignette systems can be considered as lump-sum taxes since they are independent of the extent of road use.

Road traffic causes a multitude of external costs, such as climate change due to CO2 emissions, local air pollution, accidents, noise disturbance and congestion. An efficient pricing scheme takes these negative externalities into account by internalising the cost. Ideally, the price of a traded good or service should equal its marginal social cost, i.e. the private cost of an additional unit incurred by the supplier plus the external cost of an additional unit incurred by third parties that have nothing to do with the market transaction.

When applying this principle to road transport, the following aspects must be specifically addressed.

An illustration for Switzerland

In Switzerland, external costs of transport are estimated comprehensively on behalf of the Federal Office for Spatial Development. The estimation’s method aligns with the procedures conducted by the EU, and its results are of a quasi-official nature since the determination of the country’s heavy goods vehicles charge-rate is based on it.

* Exchange rate (October 2020): 0.93 EUR/CHF
Source: Own calculations based on Ecoplan and Infras2 and Strasseninfrastrukturrechnung by the Federal Office for Statistics

Table 1 shows average variable local external costs as well as variable road infrastructure costs as a function of fuel consumption and mileage (vehicle kilometre vkm for passenger cars and ton kilometre tkm for heavy goods vehicles). For all three vehicle categories considered, the greatest costs arise from air pollution, accidents and road infrastructure. Air pollution costs were estimated based on the pollutant PM10. Note that only a small fraction of PM10 emissions are from exhaust gases (and thus fuel-related). The much bigger share is caused by tire, road, and brakes attrition, which is primarily distance-related.

The latter costs of air pollution as well as costs of accidents and noise are not completely evenly distributed according to mileage. However, there is a risk that a highly differentiated pricing system would be so complex that users would no longer respond to price signals. Therefore, for reasons of practicability, in the present proposal these costs are charged per distance driven.

As a first conclusion it can be seen from the table that almost all local external costs are mileage-dependent. For petrol-driven passenger cars with average fuel consumption per kilometre, they amount to 97 per cent of the total reported external costs.

As already mentioned, the internalisation of global external costs of climate change is extremely difficult due to the almost insurmountable difficulties in monetising them. By setting target values for CO2 emissions, Switzerland, like Europe, has chosen a different way of tackling the problem. The remaining question is then with which instruments these goals can be achieved in the most cost-effective way. The answer to this question is – at least from an economic point of view – hardly controversial: with a uniform price on all CO2 emissions. In contrast to the direct internalisation of external costs, such a price scheme follows a so-called price-standard approach, where the charge rate is set so that the politically given emission level is met.

In Switzerland, a CO2 levy currently set at 96 CHF/tCO2 is enforced. However, the levy does not apply to motor fuels.

Again from an economic perspective, there is no rationale for such an exemption. Consequently, an efficient charge scheme should tax motor fuels according to the fuel-dependent local external costs displayed in Table 1 and with a CO2 charge that is equivalent to the CO2 price in all the other sectors of the economy. In addition, mileage-related costs should be internalised through an appropriate levy per kilometre.

Table 2 illustrates this approach for Switzerland. It applies the current CO2 charge rate of 96 CHF/tCO2 which translates into 0.223 CHF/L petrol and 0.251CHF/L diesel. The third row of Table 2 shows the efficient surcharges on fuel and mileage, respectively.

To give an impression of the relative size of the fuel- and mileage-dependent surcharges, the table also displays efficient surcharges per ton of CO2, calculated with the average fuel consumption of the respective vehicle category.

Even with the inclusion of the CO2 levy the efficient surcharges on mileage are substantially larger than on fuel. For example, the total efficient surcharge for a petrol-driven passenger car with average fuel consumption amounts to 847 CHF/tCO2, of which only 121 CHF or 14 per cent is fuel-related.

Remarkably, the law explicitly states that the tax should include external costs3. Thus, the heavy goods vehicle charge in Switzerland comes close to a so-called Pigouvian tax, i.e. a charge that directly internalises external costs.

When comparing the existing taxes to the efficient price surcharges including the CO2 levy it shows that fuel is overtaxed while mileage is undertaxed. The latter applies particularly to passenger cars, which are not subject to a mileage-dependent tax.

For all vehicle categories, the total variable taxes do not cover the local external costs plus the current CO2 surcharge. This is again more pronounced for passenger cars, where the deficit amounts to 526 CHF/tCO2 (PC petrol) and 600 CHF/tCO2 (PC diesel). Because the current rate of the heavy goods vehicle charge is 0.041 CHF/tkm4 below its efficient level, an overall deficit of 272CHF/tCO2 also results for heavy goods vehicles.

The question of whether fuel consumption or distance driven should be charged is important, because fuel consumption per kilometre varies with the car fleet and is influenced by consumer choice. Therefore, only a pricing scheme that reflects fuel- and mileage-dependent costs separately creates the right incentives for the decisions of road users. For example, it can be assumed that an increase in mileage-based charges would reduce the number of kilometres driven.

Although “the internalisation of external (and infra-structure) costs is one of the leading principles in EUs transport policy”5, the analysis of the existing taxes and charges shows that there is still a lot to be done to achieve this.

Therefore, as in Switzerland, road traffic in Europe is undertaxed. A more cost-oriented pricing scheme, that includes a CO2 levy, requires higher charges and a shift from taxing fuel consumption to taxing mileage. The extent to which such a road pricing scheme should be differentiated is a question of practical feasibility. 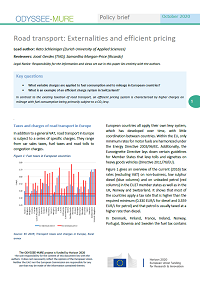