Introduction & Scope of the Brief

Policies favouring renewable energy are key for policy makers to achieve certain environmental targets. They not only provide a means to increase the share of renewable energy, but also a significant means to address climate change. Over the last few years such policies have taken many forms in different countries, regions and territories taking advantage of the most abundant natural renewable resource available to them, based on their geographical location and particular climatic features e.g. solar, wind, tidal, hydro, etc.

Considering the abundant hours of sunshine available, it is expected that among Mediterranean countries, solar should play a key part in achieving the ambitious renewable energy targets. In some cases, this has clearly been the case, in others this has not materialised, or has happened only partially.

Within this context, the aim of this policy brief is to present trends and results obtained by a number of European countries bordering the Mediterranean Sea namely, Croatia, Cyprus, France, Greece, Italy, Malta, Portugal, Slovenia and Spain in terms of exploiting solar photovoltaic and solar thermal technologies over the 2010-2016 period, specifically in the residential sector. The brief also looks at what type of incentives are behind the exploitation of photovoltaic (PV) and solar water heating (SWH) technologies in this sector; what incentives were discontinued and the reasons why they were discontinued; and, what are the main barriers and limitations hindering further growth of these two technologies in the residential sector.

Data presented in this brief was mostly made available by the respective National Energy Agencies.

In terms of solar water heating, results have been diverse. Figure 1 below shows the share of residential final energy consumption supplied by solar thermal systems. In the absence of more detailed data, it is being assumed that for the large part, this solar thermal energy is being provided by add-on type installations installed in residential properties for the purpose of producing domestic hot water. 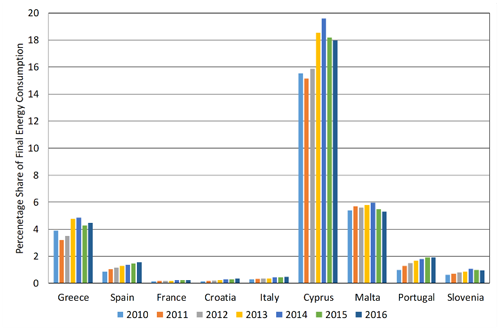 Cyprus is the leading country in this particular sector, with an average of 17% of the total final energy consumed by the residential sector (over the 7-year period analysed) covered by solar thermal. This is not surprising considering that 90% of households in Cyprus have a solar water heater installed, and that specific incentives and regulations, as will be discussed later, have made Cyprus a front runner in the exploitation of the solar thermal resource.

Malta and Greece also have a reasonable share of the total final energy consumed by the residential sector covered by solar thermal, around 4-6%. In the case of Malta, this means that around 20,000 households (≈13%) have a solar water heater. Over the same 7-year period the other countries analysed have averaged only 0.7% between them.

An interesting aspect emerging from the trends, is that in countries where solar thermal already has a significant share of the final residential energy consumption (Cyprus, Malta and Greece), the trend over the last few years has veered towards a downward tendency, probably indicating periods where incentives were not present or were less favourable, competition from other technologies or wider scoped policy decisions. Additionally, in the case of Cyprus, a reason for this downward trend may be sought in the fact that solar water heaters have almost reached saturation, whereas energy use continues increasing because of increased use of air conditioning and electric appliances. 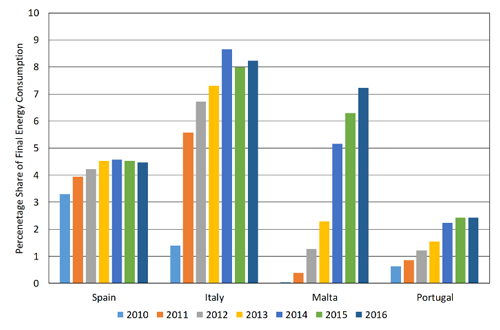 In terms of solar photovoltaic all countries for which data was available show that, over the 7-year period analysed, there has been a continuous positive and increasing trend in relation to the penetration of photovoltaic systems in the residential sector. Specifically, over the period investigated the huge annual jumps in terms of final energy consumption covered by photovoltaics in the residential sector, done by Italy and Malta, are noticeable.

It is generally agreed that renewable sources of energy technologies often require some form of fiscal or regulatory incentive in order to be competitive with conventional fossil fuel based sources of energy.

In relation to photovoltaics typically fiscal incentives are aimed either at paying part of the capital cost upfront through some sort of grant or else investment repayment via the use of feed-in tariffs.

For solar thermal the capital grant, part-financing the initial cost, is typically the only incentive route. Having said that, regulatory aspects positively discriminating in favour of such technologies, for example, the mandatory installation of solar water heating technologies in new dwellings, also exist in some countries.

Table 1 shows the main incentives that six out of the nine Mediterranean countries investigated are currently employing as part of their strategy to increase the share of solar photovoltaic and solar thermal in the residential sector.

At least 3 countries, namely Malta, Cyprus and Italy reported how incentives for photovoltaics were reduced because the technology prices locally became so competitive compared to conventionally sourced electricity, that the technology was no longer in need of the significant incentives which were being given initially.

In the specific case of Cyprus, feed-in tariffs were removed completely in favour of a net-metering agreement. In the case of Malta, the feed-in tariff was lowered from an initial €0.25/kWh for the first scheme launched in 2010, to the current €0.165/kWh.

A number of barriers and limitations specific to the penetration of solar photovoltaic and solar thermal are often put to blame as to the reason why there is not a higher penetration of these technologies within the residential built environment. Typically, the barriers and limitations are associated with either of two broad categories: the limited space available, or the investment related uncertainties such as high initial installation costs or weak credibility of the industry.

In the residential sector where space is limited a number of countries identified available roof space or site constraints as being an issue, especially in the case of urban conservation areas or ‘heritage-sensitive areas’ where systems should be hidden from view in order not to distract too much from the architectural value of the building. Additionally, apartment buildings were identified as being the most problematic building typologies, either because there is no sufficient roof space for the installation of enough photovoltaic panels to cover the needs of all apartments’ tenants, or else because of ownership issues that often preclude the installation of solar PV. Even if an agreement can be reached in principle, it can still be quite complex to split the investment and accrued revenue from the sale of electricity. Other facilities, such as heating, ventilation and air conditioning systems, water storage and other amenities which compete for the same roof space, also pose a barrier to the installation of more solar technologies.

As regards the second category of barriers and limitations, some countries identified the following as the most relevant barriers: high initial investment when no incentives are made available, weak credibility of the industry, especially where no mandatory certification of installers exists as yet, lack of information among consumers and investors, and policy discontinuity.

In terms of competition between the two technologies, in general this is not considered to be an issue as the two serve different energy commodities. However, problems may arise if roof space is limited, in which case typically solar photovoltaic is preferred, due to its versatility as an energy source. This preference may be further supported if the investment in PV is perceived as providing a better return.

Solar energy in its two main forms namely solar thermal and solar photovoltaics, is considered as a very good alternative to conventional fossil fuels, especially in regions and countries such as those bordering the Mediterranean, which have a high solar potential.

It is clear that these results are largely due to the level of incentives utilised by the various countries. Where the incentives were significant, or regulations dictated that a certain technology had to be utilised, then results showed a high share of residential final energy consumption covered by solar.

Notwithstanding this fact, this brief also highlighted a number of limitations and barriers which are preventing a wider exploitation of solar energy within the residential sector.

Amongst these barriers are (i) high initial investment costs when no incentives are made available, (ii) weak standing of the industry where no mandatory certification of installers exists as yet, (iii) lack of information among consumers and investors, and (iv) policy discontinuity. 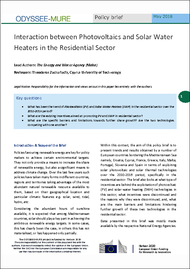