This policy brief is based on a brochure prepared within the ODYSSEE MURE project and published in 2015.

Role of the public sector

The central government has an important role as energy legislator but also as an energy consuming sector, particularly through its’ building stock.

At the lower level, local authorities have dual capacities in energy efficiency and sustainable energy supply. In their own operations they are energy consumers, service providers and buyers of various products and services entailing energy impacts. They also facilitate energy efficiency improvements of other operators in their geographical area. They operate in multiple roles as planners, developers, regulators, advisors, motivators, energy producers and suppliers.

Implementation of the EU requirements for the public sector, e.g. regarding renovation of space (see section Public buildings) necessitates decisive effort. Reflecting the challenges of implementation, the number of new purely national measures beyond the scope of the EED (Energy Efficiency Directive) and EPBD (Energy Performance of Buildings Directive) has been very limited over the last four years. However, national examples of mainly older – often long-running and effective - policies can be found in the MURE database concerning, e.g., national regulation, municipal energy efficiency and RES (Renewable Energy Sources) plans, voluntary agreements, financial measures and models (including energy performance contracting) and various information measures (including energy audits and information dissemination).

The EED and RES Directives put the public sector in an exemplary role reflecting the multi-sided role of the public sector both as energy users and as facilitators for others. The requirements of the EED fall basically into two categories - exemplary role of public bodies’ buildings (see section Public buildings) and requirements for the purchasing by public bodies (see section Public procurement). Article 13.3 of the RES Directive encourages local and regional administrative bodies to include heating and cooling from renewable energy sources in the planning of city infrastructures, where appropriate. For example, the roofs of public or mixed private-public buildings could be used by third parties for installations that produce energy from renewable sources. Furthermore, the Eco-Design Directive (2009/125/EC) and its implementing measures have an impact on energy efficiency of equipment such as street lighting, indoor lighting and appliances.

Statistics on energy consumption of public services is not available in most countries which is reflected as scarce data in the Odyssee database (https://www.odyssee-mure.eu/). Usually there is data only for the whole services sector. Therefore, reliable data is not available on the European trends or its main drivers (decomposition into main factors).

Some scattered data can be found in Odyssee. The share of public offices, education and health facilities in the total consumption of the services sector is around 30% in Denmark, Norway, Sweden and UK but only 17% in Germany.

Improved statistics would help but this is unlikely to be achieved as the budgets of statistical authorities are increasingly limited. Nevertheless, bottom-up monitoring of the impact of some policies and measures is possible because it does not usually rely on statistical data but data gathered on specific projects addressing energy efficiency in the public sector.

There are various barriers to energy efficiency, some universal and others which are specific to the public sector.

Energy efficiency is often not the priority objective over service levels. Good operating conditions always need to be sustained to ensure, for example, healthy indoor environment. However, in most cases energy efficiency and good service levels are not conflicting goals and can be pursued simultaneously.

Information barriers are common in all sectors. Few people work full-time in energy efficiency related matters making lack of knowledge and availability of time very common constraints. There is often lack of awareness and a very high perceived risk of new more efficient technologies, mistrust in energy audits and measures based on them etc.

There are challenges associated with decision making. Municipal merger policies have been implemented in many European countries for decades, which is an external factor causing some uncertainty into the decision making environment. In municipalities, decision making also has a political aspect in contrast to businesses. The number of decision makers is large, the process is distributed and decisions are also often made in short-term without due attention to life cycle costs.

Another set of barriers is budgetary in character. Firstly, many justified objectives, such as health care, social services, environmental protection and energy efficiency compete over the same limited resources. Secondly, the budget share of energy efficiency investments tends to be among the smaller ones, which makes it also a lower priority activity while more focus is put on the larger budget items and their effectiveness. Thirdly, budget items are usually ear-marked to certain functions which can lead to silo mentality making it difficult to pursue horizontal activities, such as energy efficiency or energy management. Furthermore, the rules of public budgeting – including the annual budget cycle and multiannual savings cash flow – make it difficult for public entities to finance energy efficiency investments from savings in energy costs. Authorities may have to finance energy efficiency investments from their investment budget whereas the resulting savings are credited to the operational budget. Finally, local authorities may be unable to retain the monetary savings due to efficiency improvements corroding motivation for improvements.

Public procurement legislation, both European and national, has been developed to create a level playing field and improve efficacy. Yet, it can become an impediment for energy efficiency measures. Competition requirements may even disable energy efficiency measures when decisions cannot be made in the long run. While this may not be so evident anymore in the procurement of more common goods and services, it is still true particularly in relation to new technology.

Effective approaches, policies and measures for addressing the barriers are discussed in the next chapters.

Energy conscious spatial planning is one of the corner stones in energy efficiency and increased use of renewables. It can contribute to considerable savings in both private and public budgets. Local and regional authorities can facilitate energy efficiency improvements and use of renewable energy of businesses and citizens in their geographical area. Planning should also have a view to digitalisation which is transforming the way we work, study, use services and carry out our daily lives.

In the MURE database only a few examples can be found concerning spatial planning reflecting the fact that this is still an underutilized opportunity for better efficiency. Energy efficiency in urban planning is addressed by regulation in France and by guidance in Finland. Sweden implemented the Sustainable Municipality Programme (2003-2014) where the third phase (2011-2014) specifically focused on energy smart planning.

Urban structure and mobility are very closely linked. Spatial planning can be used to enhance sustainability, including Mobility as a Service (MaaS) and energy efficiency of transport.

There is a degree of convergence between city planning and building regulation. For example, the location of a building on the building lot, which has an impact e.g. on solar exposure and lighting needs, can be governed by the city plan, building regulation or both. Building supervision authorities can take a proactive role in giving guidance and tutoring particularly to those constructing homes.

To enhance the practical implementation of measures, it is imperative that the public sector actively motivates implementation and disseminates information on the possibilities it has created for sustainability. This may include providing information on, e.g., available energy services, advisable heating options, RES options, smart grids or MaaS.

One good practice is involving energy companies in the planning process from the beginning. Today, energy is purchased from energy companies by dwellers, housing companies and regions. In the future, this can be partly turned vice versa as a building can produce energy and sell it to the energy companies.

District heating and cooling as well as use of waste heat are focus areas in both the EED (Art 14 + Annex VIII) and the RES Directives (Art 13.3). The EED requires national assessments for co-generation and district heating potential, as well as measures for its uptake to be developed by 31 December 2015, including recovery of waste heat. According to the RES Directive, the Member States should recommend the installation of energy systems based on renewable energy and district heating and cooling when planning, designing, building and renovating industrial or residential areas. This focuses particularly on the planning of city infrastructure.

Article 5 of the EED stipulates that each Member State shall ensure that, from 1 January 2014, 3% of the total heated and/or cooled floor area of buildings owned and occupied by its central government is renovated each year to meet at least the minimum energy performance requirements set by the Energy Performance in Buildings Directive (default approach). In an alternative approach Member States may decide to take other cost-effective measures, including deep renovations and measures for behavioural change of occupants. Out of the 28 EU Member States, 11 have chosen to implement the default approach and 17 have adopted the alternative approach. The EED sets the 3% renovation requirement only for the central government and does not make a similar provision for local authorities.

Particularly developing the skills and building up motivation of operation and maintenance personnel is a necessity because technical systems in buildings are becoming increasingly complex. Understanding wider systems is a prerequisite for effective energy management. According to the MURE database, over half of EU Member states mandate energy audits in large tertiary buildings but Slovenia is one of the few countries to mandate appointment of an energy manager and Estonia is following a centralized energy management approach.

Procurement and service contracts can be used to boost emerging green markets. Public authorities in Europe spend around 2 trillion euros per year, corresponding to almost 17% of the EU’s gross domestic product.

Green public procurement (GPP) raises awareness of environmental issues and creates incentives for the industry and citizens to innovate. Public procurement and service contracts can be used to boost emerging green markets.

Despite its importance, energy efficiency is not yet systematically integrated into public procurement processes albeit two thirds of the countries have reported at least one measure in this area in the MURE database.

Other barriers include lack of knowledge, the fear of procurers engaging with GPP when they have limited experience, a lack of clear guidance, shortage of practical toolkits and unclear criteria for public procurement assessments. The lack of skills and practical knowhow of public procurers around GPP remains one of the largest barriers.

The need for upfront capital investment can be a barrier for energy efficiency projects. While traditional financing market can be a viable option in many cases, energy services using new business models are emerging. These are used increasingly in public investments to energy efficiency but the markets are far from mature.

Various structured approaches have been developed to help authorities to respond to climate challenges. Support has been given by associations or active networks such as Local Governments for Sustainability (ICLEI) in the 1990’s, Climate Alliance, Energy-Cities and the Covenant of Mayors. Some have become voluntarily involved in Local Climate Plans, energy-transition experiments, eco-district projects, voluntary agreements, the European Sustainable Energy Week and the global forum “Resilient Cities”. International co-operation is particularly prominent in Medener in the Mediterranean area, BASREC around the Baltic Sea and the Nordic Council of Ministers in Scandinavia.

A new concept gaining momentum is ‘post carbon cities’. Post carbon cities must reach a massive reduction of greenhouse gas emissions by 2050, a near self-sufficiency in fossil fuels and develop the capacity to adapt to climate change. For example, Stockholm is aiming to be totally carbon neutral in 2040, Amsterdam has a 75% reduction target by 2040 and Helsinki and Bristol an 80% reduction target by 2050.

Generally, the public sector alone cannot effectively pursue energy efficiency in the future but needs wider co-operation and new approaches together with businesses, other stakeholders and citizens. Examples if citizen’s initiatives in energy efficiency and RES in several countries can be found at: http://www.communitypower.eu/en/ 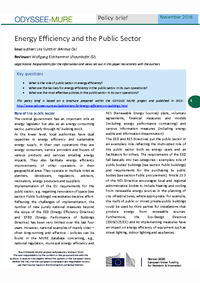