The EU primary consumption (total energy supply) at normalised climatic conditions1 has slightly increased since 2014, although GDP increased by more than 2% per year with the return to economic growth (Figure 1). This follows a significant decrease of 1.5% per year of primary consumption between 2007 and 2014 due to the financial crisis of 2009. Because GDP still increased slightly, the primary energy intensity (i.e. the ratio between primary consumption and GDP) decreased regularly and rapidly since 2007 (by around 1.8% per year), slightly faster than over 2000-2007 (+0.3 percentage points). 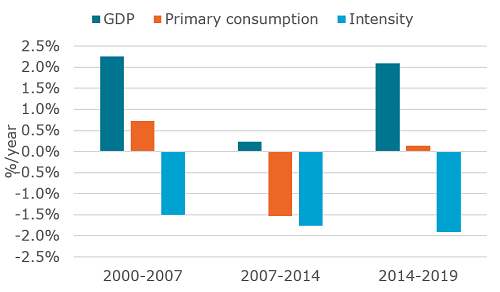 A higher progression of final consumption

Final consumption (i.e. consumption in industry, transport and buildings) has also grown since 2014. After the economic recovery, it increased by 0.8% on average each year (Figure 2). This contrasts greatly with the primary energy consumption trend. Since 2014, the transport sector experienced the highest growth (1.6% per year), while industry has experienced the lowest progression (0.2% per year). The financial crisis had a significant impact on the final consumption, with an annual reduction of 1.2% over the years 2007-2014. The effect of the crisis was most noticeable in industry, while services were the least affected. 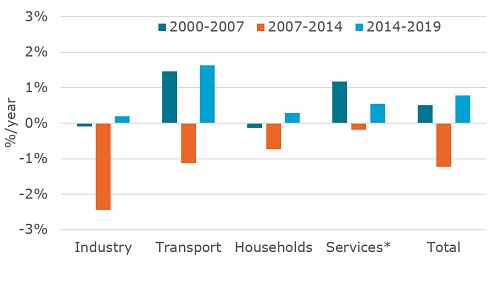 Between 2014 and 2019, the EU primary energy consumption increased by 17 Mtoe, i.e. three times less than the final consumption (+50 Mtoe) (Figure 3). This increase in primary consumption lower due to two key factors:

These two effects together have reduced the increase in primary consumption by 23 Mtoe and 20 Mtoe respectively (Figure 3). 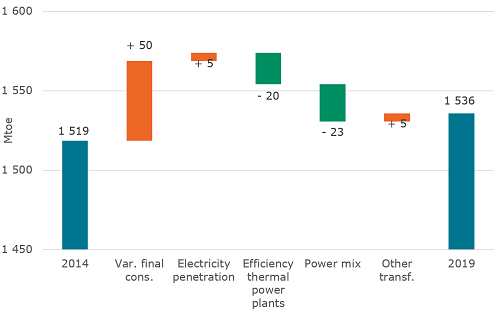 Energy efficiency progress is slowing down

At the EU level, energy efficiency of final consumers, as measured by ODEX6, improved by an average of 1.2 % per year between 2000 and 2019. Efficiency improvements have however slowed in later years, averaging 0.9% improvements per year since 2014 (Figure 4).

Energy efficiency progress has been the strongest for households (2.1% per year on average), however this has also slowed since 2014 (to 1.6% per year). This overall trend can be explained by the introduction of the many regulations affecting buildings and appliances.

In transport, energy efficiency has been steadily improving by 1 % per year, mainly thanks to cars. Efficiency gains slowed down for other modes.

In services, a lack of end-use data means only part of the energy efficiency improvements can be measured with the available indicators7. 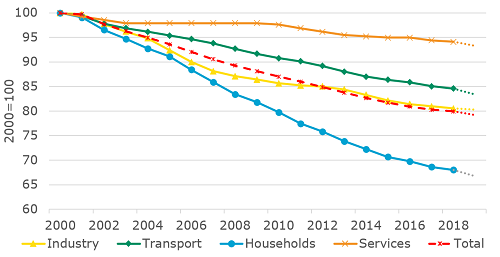 Figure 5: Energy savings in 2019 compared with 2000 and final consumption by sector (EU) 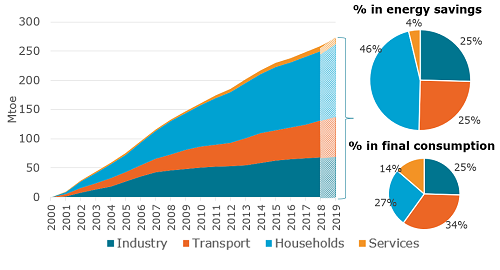 Most of the savings were in the households sector (46 %) (Figure 6). Industry and transport contributed equally to EU final energy savings (25% each). Savings in transport are much lower than their share in consumption and households are over represented (46% of total savings compared to a share in final energy consumption of 27%, i.e. 19 percentage points lower). As a result, savings represented 43 % of total residential consumption in 2019. This very favourable situation of households is mainly explained by the importance of policy measures implemented in that sector, in particular EU regulation.

Figure 6: Drivers of final energy consumption variation at an EU level between 2014 and 2019 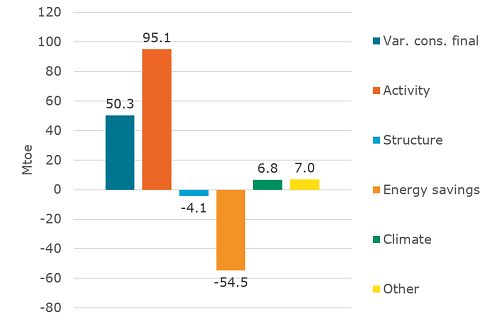 Are we got off track?

Energy efficiency targets are always difficult to define, they can be expressed in terms of:

Energy intensity targets used to be quite common, however they are now used less frequently as the energy intensity may result from other factors than energy efficiency.

The EU has been using the three targets types listed above in a complementary way. This can be seen by referring to the the most recent update of the EU Energy Efficiency Directive (EED) and its targets:

The EU’s target for 2030, however, cannot be reached with present trends and additional measures are therefore required. This has been recognised by the implementation of Article 7. Energy savings from Article 7 as reported by MS reached 40% of 2020 target in 2017, our estimate based on indicators exceed the target but cover more energy savings categories than Article 7 (calculations include all types of savings: policy related and from autonomous progress)(Figure 8). 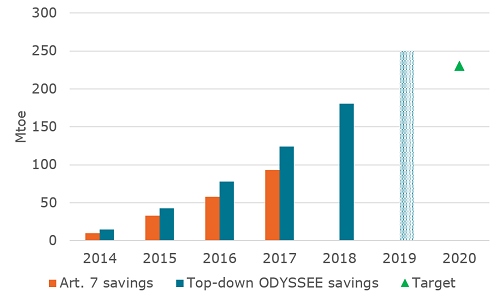 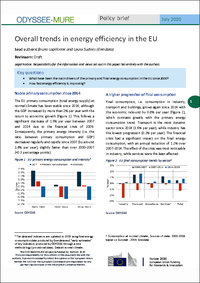