Energy Efficiency Networks (EENs) are a concept to accelerate energy efficiency progress in companies. They were developed in Switzerland back in the late 1980s. Since then, the approach has been successfully transferred to other countries inside and outside Europe, e.g. Germany, France, Italy, Austria, Sweden, the United States, Canada, Japan and China1. EENs do not have a uniform structure; instead, countries have introduced the general concept in different forms. However, apart from the common goal to improve energy efficiency in a company, most EENs do share certain functions, e.g. the exchange of energy efficiency experiences in moderated meetings, and consultations with energy efficiency experts. Some networks, e.g. in the UK, have also enlarged their focus from pure energy efficiency to resource efficiency in general2.

It has been well documented in several studies that there is still a huge potential for energy efficiency improvements in companies. These studies also show that many of these potentials are cost-effective for a company from a social perspective, and even from that of an individual private investor3. In particular, there are cost-effective saving potentials in industry in the field of cross-cutting technologies such as motors (fans, pump systems, cooling devices, compressed air systems), system optimisation and CHP.

However, even this profitable potential is not being fully exploited, primarily because of persistent barriers to the deployment of energy efficiency measures. Such barriers prevent companies from realising energy-saving potentials even though these are cost-effective under current economic conditions.

Important economic and non-economic barriers in industry include:

Energy Efficiency Networks have several functions and provide services that are suitable to both remove these barriers and strengthen these driving forces. These include:

In the following, the example of Germany is used to illustrate how EENs address the barriers to energy efficiency. There is now a 15 years experience with Energy Efficiency Networks in this country, and recent strong support for the establishment of new EENs.

History of EENs in Germany

EENs were first established in Germany in 2002. In 2008, a consortium of research institutes and companies initiated a “30 Pilot Networks” project funded by the German government. The goal of this pilot project was to demonstrate the benefits of EENs and to establish a management system - the Learning Energy Efficiency Networks system (LEEN) - for their operation at high standards. In 2014, the project was extended to 100 EENs, all operated using the LEEN standard. In December 2014, the National Action Plan on Energy Efficiency (NAPE) was published by the German federal government4. This plan adopts and further extends the idea of Energy Efficiency Networks by setting a target of 500 operational networks in 2020. However, the standards set for these networks are lower than the standards in the LEEN pilot project. By mid 2016, 75 new EENs had been established under the “500 Energy Efficiency Networks Initiative”5.

Functioning of a LEEN Network

How LEEN Networks function and their results are well documented in the literature6.

The usual network process consists of three phases (Figure 1). The initiation phase (Phase 0) establishes the network. Usually, 10-15 companies operating in different sectors are recruited by the network operator (e.g. a utility, industrial association or platform, Chamber of Commerce and Industry, city government, or consulting engineer) to form a LEEN. LEEN addresses medium-sized and large companies with yearly energy costs between 0.5 and 50 million euros.

The actual network process begins with an energy review phase 1. The companies fill in a data form concerning their energy situation and the certified consultant engineer carries out an energy audit. Based on this, the participants decide individually on their own efficiency target (confidential) and also commit themselves to a voluntary energy saving target of the whole network and to the regular exchange of experiences in their network for at least the next 3 – 4 years.

The targets set in phase 1 are to be reached in the network operating phase 2. Core elements of phase 2 are site inspections and the moderated network meetings held three to four times per year. These meetings integrate the capabilities and skills of invited experts and participants as well as encouraging the exchange of experiences. These exchanges may focus on the implementation of saving measures for common technologies such as compressed air systems, but also on organizational measures like awareness raising among employees. Another important topic is the financing of energy efficiency investments, e.g. how to access financial support in the form of subsidies, loans or aid. The participants also report on the implemented measures (e.g. difficulties and achievements, and experiences with contractors). These points are particularly valuable for the participating companies, since the information provided is objective, because the speakers are not trying to sell anything and the results are from real applications presented by unbiased peers. All these activities in the network operation phase help to reduce both the economic and non-economic barriers to energy efficiency in companies.

Continuous monitoring of the implemented measures by the companies makes it possible to track the progress made in improving energy efficiency and reducing energy-related greenhouse gas emissions in the company and the entire network. This monitoring is assessed once a year by the consultant engineer. In order to guarantee an overall performance standard, the LEEN network management system provides various tools such as a data collection form, software-based techno-economic calculation tools, sample reports including a measure overview, and minimum requirements with respect to the energy review report. The LEEN standard is not an official standard approved by a standardization organization. It is a voluntary quality standard for establishing and running EENs.

Figure 1: Stages of a LEEN network 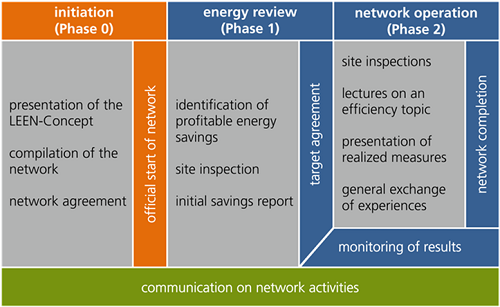 There was a comprehensive evaluation of the 30 pilot networks. Selected key results are presented below.

A major share of the identified measures addresses electrical cross-cutting technologies. More than 30 % of the measures deal with process heat and space heating. Energy carrier changes resulting in reduced energy demand or reduced CO2 emissions represent only a smaller number of the measures. The average payback time for the profitable measures is between 2.2 years for compressed air systems and 4.3 years for air conditioning. However, not all of the measures are simple and cheap “low- hanging fruit”. Some require a notable investment. The majority (~85 %) of the identified measures requires investments below € 50,000, but 17 % require an investment above € 50,000.

The quantitative monitoring performed jointly by the energy manager and the consulting engineer reveals that the annual efficiency improvement of the participants was 2.1% per year on average. In absolute terms, this resulted in energy savings of about 5 PJ per year after the 4 year duration of the 30 pilot networks.

As part of the evaluation, the participating companies were also asked about their experiences with the networks. There were positive reports for the concept of EENs. The majority of participants (over 90%) stated that they accomplished the energy efficiency measures recommended during the network operation phase. 75% reported that some of those measures would not have been implemented without the networks. Additionally, about 75% of the participants rated the benefits of network participation as “rather high” or “very high”. Over 60% indicated that the contacts made within the network were used beyond the network meetings.

Other types of Energy Efficiency Networks

Apart from the classical LEEN Network (http://leen.de/en/leen-netzwerke/) for larger industrial companies, other Energy Efficiency Network initiatives have been established in Germany over the last few years, which illustrate the large variety of the EEN concept:

Based on the experiences in Switzerland, Germany and other countries, some general factors can be derived that drive the success of EENs7:

As the experience with longer running EENs shows, this concept can make a significant contribution to improving energy efficiency in companies. New network initiatives can build on the success factors derived from previous ones. EENs not only contribute to reducing energy consumption and energy costs, they also contribute to climate protection and provide opportunities for domestic manufacturers and installation firms. The network approach can help to reduce the burden on the energy infrastructure, while at the same time minimizing the dependence on energy imports. These are the reasons why the idea of EENs has already spread from its pioneers in Switzerland and Germany to several other countries. Worldwide dissemination of the concept of EENs including some basic requirements to ensure the success of the instrument is a conceivable and desirable goal for the near future. 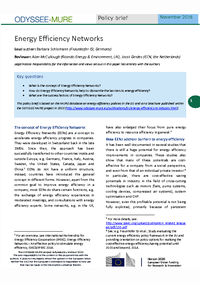