This policy brief discusses the measuring and monitoring energy poverty in the EU Member States.

Energy poverty is a situation when persons struggle to keep their home adequately warm in winter and cool in summer. They struggle to pay electricity bills, usually live in poorly lit homes, or are unable to use domestic appliances as needed. They may lack – in part or fully – access to the power grid, becoming socially excluded and suffering negative consequen¬ces as a result.

Behind these relatively easy to describe circumstances, however, lie a series of complex ques¬tions. Why is energy poverty not just called ‘income poverty’? Who is most affected by this condition and how? Are urban or rural dwellers more vulnerable, and in what manner does it vary across different regions and countries? What are the best ways to detect, measure, monitor, and address the problem?

Energy poverty is commonly defined as the inability to secure adequate levels of energy services in the home. This definition has three interlinked elements that need further explanation.

First, secure means that there may be multiple reasons why a household cannot attain the energy it needs. This may involve not being able to pay for the required energy (energy affordability) or lacking the necessary supply infrastructure (energy access). Energy affordability challenges are more common in developed countries, whereas energy access is frequently an issue in the developing world. The access element involves not only electricity grids but also district heating and gas.

Second, the adequate level of domestic energy involves both a material and social minimum. The material minimum is a level of domestic energy services below which living in a home is unhealthy, as cited in most academic papers on the subject, which generally advocates as a temperature of 21°C in occupied rooms, and 18 °C in bedrooms. The social minimum is a level of domestic energy below which a household has problems in undertaking customs and practices that define membership in a society. These households are living in a home that is too cold, too warm, inadequately lit, or imposing limitations on appliance use, with well-known negative effects on personal wellbeing and social participation.

Third, energy services delivered to home are bene-fits contributing to human wellbeing. Energy services include activities such as heat and cooling of living spaces, water heating, lighting, and powering of appli¬an¬ces. Energy services normally satisfy specific human needs, require human involvement for utili¬zation, and rely on energy conversion inside the boun¬daries of the home. All this depends on the energy efficiency of domestic installations and infra¬struc¬¬ture, such as the building envelope (walls, win¬dows, doors, roofs), heating systems, and appliances.

Despite being dependent on local situations, the causes of energy poverty are relatively well known. In developed countries, a household is more likely to be energy poor if it has a lower-than-average income, lives in an energy inefficient home, has higher-than-average energy needs and is unable to use forms of energy best suited to its needs due to technical, legal, or economic barriers.

The consequences of energy poverty are primarily poor health outcomes: prolonged exposure to cold air, moisture or condensation leads to adverse consequences on respiratory and circulatory systems and in turn leads to increased mortality and morbidity during winter (as well as summer heatwaves in some situations). Energy poverty also has severe impact on mental health and limits educational and economic out¬comes. The use of polluting fuels among energy-poor households is also associated with air pollution.

Energy poverty occupies a specific geographical region in Europe and beyond. The values for some of the most common indicators used to detect these problems are highest in South-eastern European states, as well as several other Southern, Central, and Eastern European states (Figure 1). In essence, an energy poverty ‘divide’ exists between this group of countries, on the one hand, and Northern and Western European states, on the other. In countries where energy poverty rates are higher, this is due to a combination of circumstances: increases in energy prices, high levels of income poverty, low quality and inefficient housing, lack of necessary energy infrastructure, and additional social vulnerabilities (gender, disability, ethnicity). 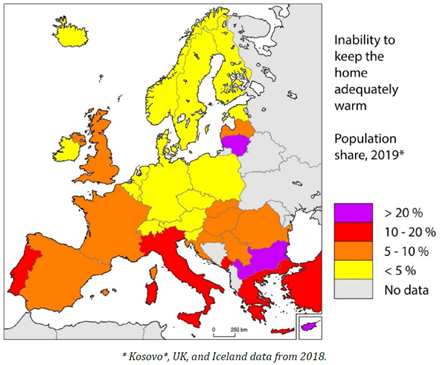 There also exist differences among and within countries. Rural areas are particularly vulnerable as people living there usually inhabit lower-quality housing and are often forced to rely on polluting fossil fuels (such as fuelwood and coal) for heating, especially in the South-eastern European countries. In urban areas, residents of large housing estates equipped with district heating may often find it expensive to pay for heating and hot water.

Definition and measuring of energy poverty in selected EU countries

It seems that an agreed definition of energy poverty has proven to be elusive and is contested. Much of the early research into energy poverty within the EU has been aimed at providing a definition – with early papers using the term fuel poverty as opposed to energy poverty. These concepts have different origins and different focuses. Energy poverty has been largely explored in the context of the Global South where barriers to energy access are linked to poor infrastructure as well as low incomes resulting in households relying on wood and other forms of biomass which is strongly associated with health issues. Fuel poverty has been the term used in the United Kingdom and Ireland and is linked to specific causes – low incomes, poor energy efficiency of the housing stock. Table 1 gives an overview of definitions and indicators using in measuring energy poverty in selected EU countries.

However, detection and quantification of energy poverty is a complex and challenging task. There are three main reasons for this:

So, to conclude, measuring and monitoring energy poverty is not an easy task. It includes specificity of every single country and depends on facts that are not easy to measure. Nevertheless, some countries succeed to define and measure indicators of energy poverty which is presented in the policy brief. 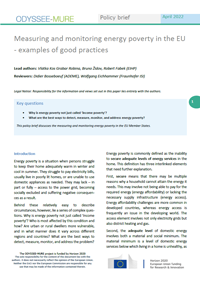