The EU total energy supply at normalised climate conditions1 has been relatively stable between 2014 and 2019, although GDP increased by 2.2% per year with the return to economic growth (Figure 1). In 2020, with the COVID-19 pandemic, both GDP and total energy supply dropped by more than 6%. The primary energy intensity (i.e. the ratio between total energy supply and GDP) has decreased slightly more rapidly over 2014-2019 (2%/year) than over 2007-2014 (+0.35 pts). In 2020, this declining trend was stopped. Primary consumption is estimated to be 6% under the EU’s 2020 target. 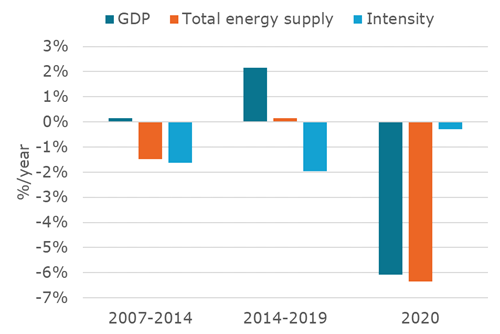 A higher progression of final consumption

Final consumption has grown by 0.7% per year between 2014 and 2019, in sharp contrast to the stability of total energy supply (Figure 2). The transport sector experienced the highest growth (1.4% per year), while industry consumption grew the least (0.3% per year). Final consumption dropped by 5.6% in 2020, with transport consumption falling by 11% due to lockdown and travel restrictions. Households were the only sector with an increase in consumption as people stayed longer at home (+1.4%). Services registered the highest decrease in electricity consumption (-7%) due to massive teleworking and the temporary closure of many public-access establishments. 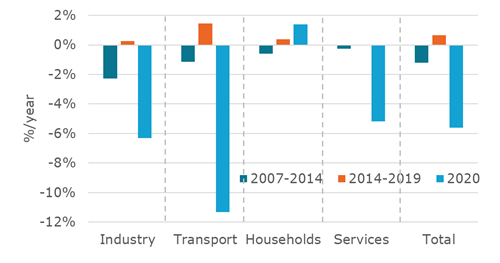 The lower progression of the EU total energy supply between 2014 and 2019 compared to the final consumption (17 Mtoe, compared to 36 Mtoe) (Figure 3) is mainly explained by changes in the power mix, with:

Energy efficiency progress is slowing down

Energy efficiency progress has been the strongest for households, even if it has also slowed down since 2014 (to 1.1% per year, twice lower than over 2000-2014). This overall trend can be explained by the introduction of the many regulations affecting buildings and appliances.

In industry, the pace of energy efficiency improvements has been halved since the financial crisis (0.8 % per year since 2007, compared to 1.6 % per year before).

Transport sector lagged behind (0.4% per year since 2014, twice less than over 2007-2014) because the efficiency of cars was no longer improving due to the penetration of SUVs, and a reverse trend was observed for dieselisation. 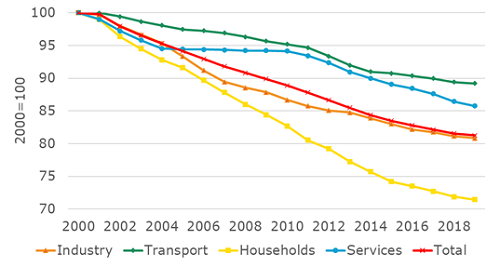 Energy efficiency improvements led to significant energy savings, with an estimated 196 Mtoe saved in 2019 compared with 2000 (Figure 5). These savings represent the sum of the additional annual energy savings by sector and are equivalent to 21 % of final energy consumption. In other words, without these savings, the final energy consumption would have been 21% higher in 2019. Because of the slowing pace of energy efficiency improvement, the annual additional savings have been regularly decreasing from an average volume of 11.6 Mtoe per year over 2000-2007 to 11.1 Mtoe per year over 2007-2014 (divided by 2 in industry) and 7.3 Mtoe per year since 2014. Since 2014, these savings have been halved for transport and households.

Households are responsible for almost half of the savings (44 %) and are overrepresented compared to their share in final consumption (27%) (Figure 5). Industry contributed to 31% of these savings. The share of savings in transport is twice lower than its share in consumption (respectively 15% and 31%). The significance of households’ savings is mainly explained by the importance of policy measures implemented in that sector, in particular in EU regulation.

Figure 6: Drivers of final energy consumption variation at EU level between 2014 and 2019 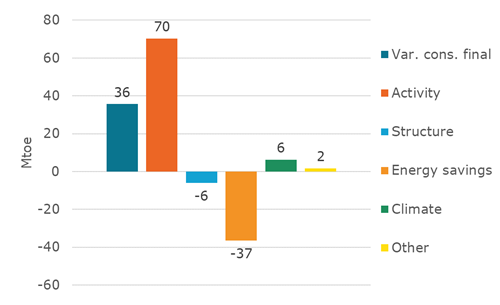 What can we say about energy efficiency in 2020?

In general, energy efficiency deteriorates in periods of deep recession in productive sectors (industry, services and freight transport): indeed, energy consumption does not follow the reduction in economic activities because of a lower use of industrial capacities or a lower load factor for trucks, leading to an increase of indicators of specific consumption and a lower “efficiency”, not from a technical viewpoint but from an operational viewpoint.

The same applied in 2020 for public passenger transport (train, metro, bus), as lockdowns and sanitary measures have led to a sharp reduction in traffic and load factors9. This explains why the energy intensity stopped decreasing in 2020.

In addition, energy efficiency is also strongly linked to existing policy measures (e.g. support to retrofitting of buildings), which means that it is less sensitive to a crisis. For instance, the renovation of social buildings jumped in 2020 in Denmark (multiplied by 4) and France (60% increase) and increased slightly in Sweden, Germany, Finland and Austria11.

These estimates indicate that in 2020, almost all the decrease of the final consumption is due to the contraction of activity related to the COVID-19 pandemic, while energy savings contributed to a reduction in consumption of 8 Mtoe (Figure 7). 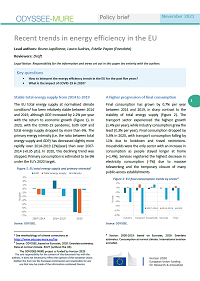