This policy brief is based on a brochure prepared within the ODYSSEE MURE project published in 2015.

Industrial energy consumption1 has remained roughly stable at EU level between 2000 and 2007 and has decreased rapidly since then, 200% faster than the declines in industrial activity.

In most countries, industry represents a decreasing share of the energy used by final consumers (25% in 2014, compared to 29% in 2000 at EU level). However, in five countries (Austria, Germany, Latvia, Malta and Slovakia) the share of industry has increased. The industrial sector is responsible for almost half of the energy consumption in Finland, between 30 and 40% in Norway, Austria, Belgium, the Czech Republic, Romania, Sweden and Slovakia, but only 15 to 20% in Denmark, Greece and the UK.

Since 2007, the industrial recession had an important effect on industrial energy consumption in most EU countries (Figure 1), except 5 countries (Poland, Slovakia, Romania, Estonia and the Czech Republic). At the EU level, industrial activity declined by an average of 1.1%/year between 2007 and 2014. This contrasts significantly with the trend during the period 2000-2007 when industrial growth averaged 1.9%/year.

Figure 1: Energy consumption trends and activity in industry in the EU

Chemical and steel industries are the main energy consuming branches, each corresponding to 19% of total industrial consumption in 2014; while the share of chemicals is increasing (+1.3 percentage points at EU level since 2000), the share of steel is declining (-1.6 percentage points). The breakdown of energy consumption by branches varies widely across EU countries: the pulp and paper industry plays a dominant role in Finland and Sweden (more than 50% of the energy consumption), whereas it is chemicals in the Netherlands (around 40%); non-metallic minerals in Cyprus (64%), Croatia and Portugal (around 30%); steel in Slovakia and Luxembourg (above 50%) and food in Ireland and Croatia (20%).

Since 2007, energy consumption has decreased in most industrial branches, especially in steel and non-metallic minerals with consumption 25% lower in 2014 than in 2000 (Figure 2).

Energy efficiency has improved more slowly since the recession (0.9%/year after 2007 compared to 1.9%/year before). There has been limited progress in most branches and no improvement for other branches such as steel, cement and machinery (Figure 3). Energy efficiency progress is measured with an index, called ODEX, that is calculated by weighting trends in the specific energy consumption indices of 14 branches2.

This slower progress in energy efficiency since the recession is mainly explained by the fact that energy consumption did not follow the reduction of activity. On the one hand, the large equipment did not operate at full capacity and so it was used less efficiently, on the other hand, part of the consumption was not linked to the level of production.

As it is partly based on specific energy consumption in physical units of production, ODEX captures improvements in energy efficiency better than traditional energy intensities per unit of value added. For some branches, however, the trends shown may include some non-technical changes as well, for example in the chemical industry (the shift to light chemicals such as pharmaceuticals), or in the steel industry (changes in the processes with increased penetration of electric steel, the less energy intensive process3), or in cement production (changes in the production chain such as in the clinker-cement ratio due to higher imports or exports of clinker, the most energy intensive component4), or else the closure of old and less efficient factories.

More than half the energy savings since 2007

Progress on energy efficiency resulted in energy savings that reached 63 Mtoe in 2014 for the industrial sector compared to 2000. Without energy efficiency improvements, energy consumption would have been higher by 63 Mtoe. The annual volume of energy savings has more than halved in the industrial sector since 2007, from an average of 6.4 Mtoe/year over 2000-2007 to 2.6 Mtoe/year over 2007-2014 (Figure 4).

In 2014, energy savings in industry reached around 150 Mtoe compared to 1990, without energy efficiency improvements (Figure 5).

The energy consumption of industry in the EU has decreased by 59 Mtoe between 2000 and 2014, which is almost equivalent to the energy savings achieved6 (Figure 6). The decrease in industrial activity contributed to reducing consumption by 21 Mtoe, all other things being equal. Changes in the structure of industrial activity towards more energy intensive branches (mainly chemicals) contributed to increase consumption.

Steel and cement industries: benchmarking of performance should be made at similar process or product mix

In the steel industry, as the oxygen process requires 2 to 3 times more energy than the electric process, it is important when comparing the average specific energy consumption per tonne of crude steel to take into account the “process mix” (i.e. the share of the two processes). 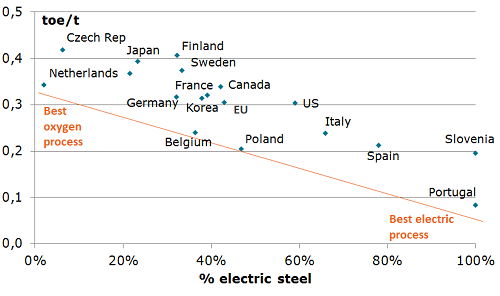 For cement industry, differences across EU countries in the energy consumption per tonne of cement do not only reflect different levels of energy efficiency, but also differences in the clinker to cement production ratio, i.e. in the composition of cement (% of additives) and the share of clinker produced in the country12. Therefore, comparisons between EU countries should be made at similar ratios of clinker/ cement production, as shown in Figure 9. For instance, Italy is the benchmark for countries with a ratio in the range 70-80%. Distance to the orange line (which represents the world best practice) indicates the potential for energy efficiency improvements. 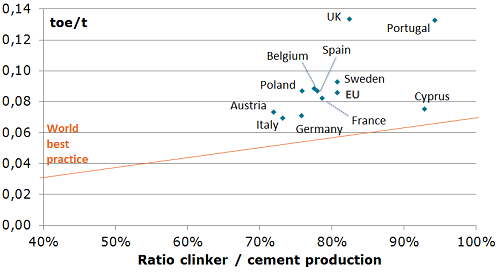 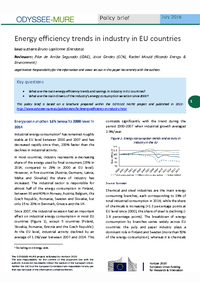