The heat sector has been identified as one of the cheapest options for integration of renewable energy carriers.

75% of the fuel for conditioning buildings come from fossil fuels

Heating and cooling of buildings consume half of the EU's energy (546 Mtoe (1)) which makes developing an ambitious strategy for the efficiency and sustainability of heating and cooling systems essential in order to reach the goals set in the climate agreement COP21 (2).

Therefore, the European Commission adopted a strategy in February 2016 as part of the wider Energy Union Package. To support this uptake, a total of roughly EUR 166 million of EU funding was allocated for research, demonstration and market uptake of energy efficient, low carbon and renew-ables heating and cooling solutions (1).

45% of energy in heating and cooling in the EU is used in the residential sector, 36% in industry and 18% in services (3). 75% of the energy used for Heating Ventilation and Air-Conditioning (HVAC) systems in buildings comes from fossil fuels, although this sector is moving toward cleaner and renewable energy (Figure 1).

Figure 1: Share of primary energy for heating and cooling, 2012 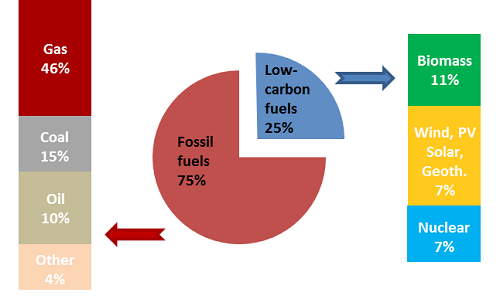 A comparison of final energy demand for heating and cooling by end-use demonstrates substantial differences across the European countries (Figure 2), much of it due to the structural and climatic differences. Naturally, space cooling shows clear peaks in Mediterranean countries. Despite the differences, space heating and process heating account for the major share in most countries.

The policies and objectives of energy efficiency and decarbonising energy used for heating and cooling are contained in various measures.

Figure 2: Final energy demand for heating and cooling per end-uses in Europe in 2012 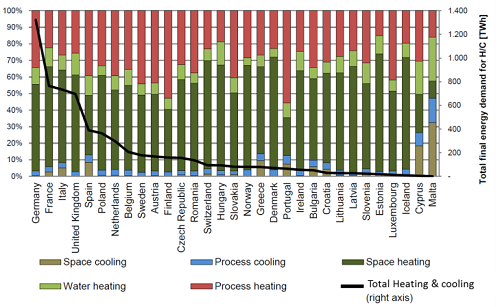 Efficiency measures include improvements to the building envelope insulation, air tightness and ventilation in both new buildings and renovation of the existing stock. Decarbonisation measures included the use of renewable energy as well as the decarbonisation of the electricity and district heating schemes. Within Europe, the legislative or normative measures in the regulatory frameworks have been identified as the most frequently used and most effective measures to reduce energy, followed by financial support and information activities (Figure 3) in the residential sector.

Figure 3: Energy efficiency measure patterns of the residential sector: development of measure by type over time (EU 28 + NO, SC, CH) 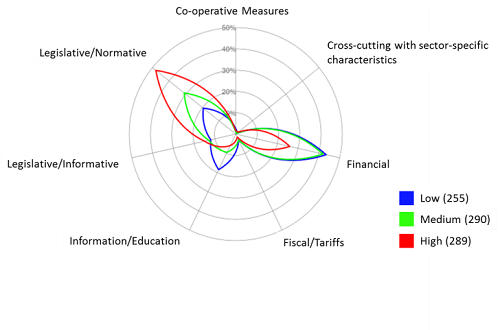 Increasing the share of renewables in the heating and cooling systems is part of the national policies of all EU Member States for reaching the 2020 targets (Figure 4). These policies address technologies producing direct heat coming from solar energy, bio¬energy, geothermal energy and ambient energy. Policies in this field refer to renewables either directly through regulations or indirectly through frameworks often targeting the energy system rather than a specific sector. Providing subsidies and incentives have been identified as one of the main drivers for these measures (4) (e.g. in Austria the national subsidy scheme for thermal renovation “Sanierungscheck” is provided (43.5 Mio € per year) and well accepted by consumers since 2009. More than 113,300 households and 4,300 businesses have received grants so far www.sanierung17.at).

A number of fundamental challenges can be identi-fied for the implementation of renewable heat. These include fragmented market and investors, market infrastructure and strong climate influence (4). In addition to these, the renewable energy is produced locally and must match local demand. Sometimes, measures for zero energy buildings might compete with renewable energy deployment. Heat demand and production can vary over time; heat is a heterogeneous commodity that requires different temperature levels for different needs.

Countries have implemented different strategies to meet the above mentioned challenges and characteristics of the heating sector in introducing low carbon technologies. In Denmark, for example, space heating demand in urban areas is mainly provided through district heating in combination with a high share of wind‐generated electricity: when electricity prices are low in winter, heat pumps are integrated in the district heating network. When electricity prices are low in summer due to high wind electricity outputs, a combination of technologies – solar hot water and heat pumps – is used.

The governments rely on different types of instru-ments to support renewables:

Strong regulatory obligations for implementing low carbon systems especially in new buildings are starting to become more common. In Austria, for example, the building regulation 2015 prescribes the minimum use of these systems for new buildings. The 2011 amendment of the German Act on the Promotion of Renewable Energies in the Heat Sector extends this obligation – initially applying to new buildings – to all existing public buildings used for legislative or executive purposes.

In recent years, the solar thermal technologies combining water and space heating – called Solar Combi-Systems – have been developed further. Countries with the highest market shares for these systems are Sweden, Norway, the Czech Republic, Germany and Austria (2). In Europe, the cost per kWh of solar thermal systems for electric heating and cooling (which is widely used in Central and Southern Europe) is already cheaper than the cost of natural gas.

The most widely used renewable energy for heating today is bioenergy (mostly in solid form), representing some 90% of all low carbon heating. Modern on‐site bioenergy technologies include efficient wood burning stoves, municipal solid waste incineration and pellet boilers. In Europe, Sweden is the largest consumer of wood and wood waste for district heating, followed by Finland (4). Use of liquid and gaseous biofuels used for heating is marginal.

Next to bioenergy, heat pumps, which provide highly efficient means of cooling, space and water heating, are being used more and more in the European countries.

Renewable energy carriers are also used in district heating and cooling and can tap a wider range of locally available low carbon energy sources, e.g. solar thermal, geothermal and biomass. District heating can easily integrate more renewable electricity through the use of large heat pumps, electric boilers and large-scale thermal storage. Countries using geothermal energy for district heating include Germany, Austria, Denmark, Hungary, Slovakia and Belgium. At EU Level, 45% of district heating systems are used in the residential sector followed by the industrial sector (34%) and the tertiary sector (21%) which uses mainly gas as primary fuel. The energy supply composition for district heating is very country-specific. Fossil fuels (mainly natural gas and coal) cover a share of 80 100% of the energy supply for district heating in Eastern European countries (Bulgaria, Czech Republic, Hungary, Poland, Romania, Slovakia) in 2012 whereas biomass plays a prominent role in Sweden (49%) as well as in Austria (41%) and Estonia (35%).

The recovery of heat from waste and sewage water is another practice that is already used in many European cities. Its extension to full economic potential could significantly contribute to the reduction of primary energy demand and decar-bonisation.

Many countries in Europe have successfully implemented policies and measures on energy efficiency of HVAC in buildings. In Figure 5, the countries with these successful measures are evaluated.

Figure 5: The countries with successful measures for energy efficiency policy regarding space heating

The demand reduction and decarbonisation solutions in the European countries are affected by different fuel mixes and the structure of the national energy systems, the availability of renewable and waste heat resources, the characteristic of energy infrastructures, individual heating systems and building stocks and development trends. They also depend on the share and type of fossil fuels, the availability of nuclear energy and on the potentials for wind, solar, geothermal and hydro or bioenergy.

The energy systems and their application regarding energy saving towards 2050 should be planned carefully and tailored for each country concerning its geographical situation. In the IEE-Stratego project different heat roadmap scenarios for five European countries were examined and compared to a business-as-usual-energy system for the year 2050. 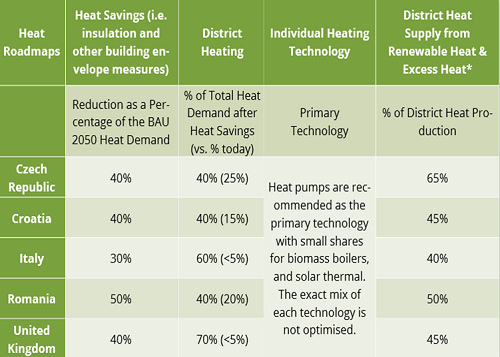 These five projects applied a holistic energy system analysis to perform comprehensive assessments for heating and cooling for the Czech Republic, Croatia, Italy, Romania and the United Kingdom. These comprehensive heat strategies consider a combination of heat savings, heat networks in urban areas and individual heating in rural areas. For each country, the various individual heating solutions were compared to quantify their impact in terms of costs, energy savings and carbon emissions. In Figure 6, the results of the measures are demonstrated (5).

The results of the project show that, for example, each urban area needs a strategic master plan on how to organise this transition towards a more sustainable heating and cooling system. Among others, it was shown that the heat sector is one of the cheapest options for integrating renewables; and that 50% of the heat demand in Europe can be supplied with district heating. 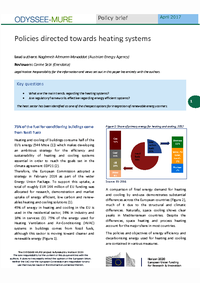