Measures to tackle fuel poverty require a dual focus: flexible identification and definition of the phenomenon and highly granular data.

People’s domestic energy deprivation is a global structural problem, driven by multiple causes and resulting in multiple consequences. Scholars and policy analysts usually approach the problem from two distinct angles: affordability and accessibility of energy services (Table 1). The two prospects mirror the distinction in definition between i) fuel poverty and, ii) energy poverty, respectively.1 This policy brief adopts the former concept since it is traditionally used to describe conditions of domestic energy deprivation in developed economies.

According to the EU-SILC data provided by Eurostat, 6.9% of the population of the European Union (EU) (more than 35 million people) struggled to keep their homes adequately warm in 2019. The country with the highest share is Bulgaria (30.1%). The lowest shares were found in Austria and Finland (both 1.8%). Similarly, the percentage of the EU’s population reporting arrears utility bill arrears is 6.1%. The most disadvantaged country is Greece (32.5%), whereas the Netherlands has the lowest proportion (1.5%).

A proper investigation of cause and consequences of fuel poverty suffered by households requires a flexible approach. Design of tailored strategies and design of effective policy measures depends on answering three questions: (i) How can fuel poverty be conceptualised? (ii) How to set-up measures that allows a reliable assessment of the size of the problem and consistent comparisons? (iii) How to establish a connection with core energy policy objectives, especially energy efficiency?

The EU is a global frontrunner on fuel poverty and energy poverty, by mainstreaming the issues within energy and climate strategies and actions. Since the early legislative initiatives on energy markets liberalisation, EU institutions recommended that Member States set-up strategies to support disadvantaged consumers. As part of this, EU called for the adoption of a definition of “the concept of vulnerable customers which may refer to energy poverty”.

Lack of agreement on a common definition is due to the complexity of the phenomenon. As poverty in general, fuel poverty is triggered and exacerbated by numerous causes and associated to multiple effects. Observed differences among countries or social groups stem from the influence of systemic factors (geography, economy, culture, etc.) and specific characteristics (age, sex, education, employment, health, housing, etc.) of the reference population. Some studies suggest not to rely on a stringent definition but rather to assume a flexible specification of what determines the vulnerable consumers. Studies also recommend that data collection and monitoring should be improved in these areas to better understand the factors that influence the risk of falling into energy poverty.

Table 3: Selected indicators for the measurement of fuel poverty

The pursuit of a one-fits-all definition is a controversial topic among researchers, policy analysts and institutions. There is conversely consensus that fuel poverty needs to be better mapped, by setting-up thresholds based on the household’s overall energy use and energy expenditure capacity. Hence, universally used indicators that combine these data or use information from consumers declarations that directly reflect the existence of problems in attaining necessitated level of energy services (Table 3).

Graphs in Figure 1 depict the indicators reported in Table 3, sourced by the EU Energy Poverty Observatory. The different underlying rationale of the indicators is reflected in the variability of the estimates. For the same countries, different indicators provide different measures of fuel poverty.

Consumption per dwelling for space heating decreased for almost all EU countries. Exceptions are Malta, Bulgaria, Italy, Poland and Hungary. 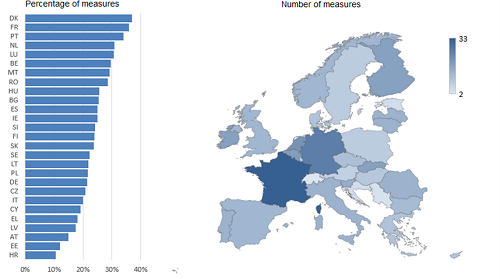 Conversely, there is room for improvement in case of consumption of electrical appliances, which either remained unchanged or increased over the period, for most countries. This trend is probably determined by residents’ behaviours and attitude towards energy consumption, since technological improvements tend to reduce unitary consumption per appliance.

A forward-looking strategy on energy efficiency in buildings could thus bring many positive effects: (i) improving people’s living conditions, (ii) decarbonising the energy system, (iii) sustaining recovery and growth. These are the main objectives pursued by the recent Renovation Wave, which as the backbone of the EU Green Deal on energy efficiency in buildings, shows a focused orientation on fighting energy poverty. Among the key actions to be taken in 2021, the EU is committed to “tackling energy poverty and worst-performing buildings: launching the Affordable Housing Initiative piloting 100 renovation districts.”5 Renovation and improvements to the energy performance of buildings would also bring multiple indirect effects, such as (i) improvement of health, due to the reduction of air pollution, and consequent reduction of healthcare costs, and (ii) boost economic activity.

The Renovation Wave sets the objective of doubling the current renovation rate in the next ten years, targeting about 35 million buildings. The mobilisation of financial resources (especially from the private sector) is a key part of the challenge to harnessing the untapped potential of renovations and residential improvements in energy efficiency and is key to enabling any ambitious policy action. Policy makers face different types of barriers to the adoption of specific measures, in particular (i) lack of appropriate regulatory and legal framework, and (ii) lack of proper understanding of the market. Improved legislation and improved access to finance would boost the willingness to invest and reinforce the awareness of the profitability of energy efficiency projects.

According to the MURE database, European countries have a solid policy framework for supporting energy efficiency in the households’ sector. Leading European economies, France, and Germany in particular, show a large mix of instruments.

Although energy efficiency measures also deliver effects in terms of fuel poverty reduction, the specific target of vulnerability and alleviation of energy deprivation conditions is not uniformly addressed by EU countries. As highlighted in [the forthcoming policy brief “Incentives and Energy Poverty” a limited percentage of EU Member States set up tailored targets and planned additional specific measures for the coming decade. In some cases, countries have planned a wide set of solutions (Ireland, Malta, Lithuania, and Slovenia). In some other cases, the alleviation of fuel poverty is completely left to social policies (Denmark, Netherlands, and Sweden).

Energy poverty is a complex issue affecting many EU MS. It is intrinsically linked with energy efficiency in the home, and the two together have wide reaching impacts, affecting people’s living conditions, economic growth, and decarbonisation. These topics therefore require additional resources and the adoption of tailored interventions at both the EU and MS level. This would turn energy poverty reduction from a positive spillover of energy efficiency promotion into a specific policy priority for disadvantaged households. 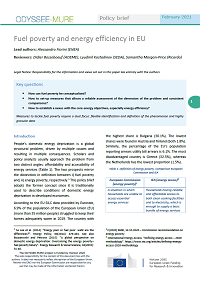