This policy brief discusses, based on the Odyssee and MURE databases, through the use of energy efficiency indicators how the EU ETS may have promoted energy efficiency progress in the EU in the period 2005-2019/2020.

Next to the Directive for Energy Efficiency (EED), the European Emission Trading Scheme (EU ETS) is another important tool to encourage energy savings in the industrial and energy sectors. Although the EU ETS’s primary aim is to reduce Greenhouse Gas (GHG) emissions, it also has an impact on energy efficiency. It is therefore important to understand how the EU ETS and the EED interact, and how the EU ETS promotes energy efficiency. This policy brief therefore analyses what the main interacting mechanisms between the two instruments and then set up a detailed top-down approach based on the ODYSSEE indicators (www.odyssee-mure.eu) to establish energy savings from the EU ETS.

Launched in 2005, the EU ETS covers GHG emissions from factories, power plants and other emissions intensive installations. Domestic aviation (intra-Euro¬pean flights only) entered the system by 2012. The system works on the "cap and trade" principle. This means there is a "cap", or limit, on the total amount of certain GHG that emitters covered can emit.

Within this cap, companies receive emission allowances that they can sell to or buy from one another as needed. The limit on the total number of allowances available ensures that they have a value. At the end of each year each company must hand in enough allowances to cover all its emissions, otherwise heavy fines are imposed. If a company reduces its emissions, it can keep the spare allowances to cover its future needs or else sell them to another company that is short of allowances. The flexibility that trading brings ensures that emissions are cut where it costs least to do so. The number of allowances is reduced over time so that total emis¬sions fall. In 2020, the emissions cap was set to 21% lower than in 2005.

The three different phases of the EU ETS in the time period 2005-2020 (Phase I-III) and their main allocation principles are shown in Figure 1. The EU ETS is now entering its fourth phase, starting 2021 with much larger number of elements.

This is further accompanied by further instruments such as the Modernisation Fund for power plants in Eastern Member States, as well as a Social Fund to counteract to distributional effects in society). Finally, the phase to come will enhance integrity of the scheme by strongly enhancing the role of the Market Stability Reserve (MSR).

Given that the EU ETS is about to enter this new phase, the question now arises, whether the EU ETS has triggered energy efficiency improvements in the 15 years of its existence.

The main lever of the EU ETS is the allowance price, shown in Figure 2. Except for the early Phase I, prices were low through roughly a decade, and only rising starting 2019 due to the reforms applied to the EU ETS (lowering the cap, creating of the Market Stability Reserve MSR).

In this section we describe the impacts which the EU ETS may have in the industrial sector, the energy sec¬tor and the aviation sector in terms of energy efficien¬cy or energy consumption. Besides such impacts on energy issues, the EU ETS may have further impacts in these areas, for example on the introduction of innovative low-carbon technologies. However, such long-term impacts are not considered here.

Impacts of the EU ETS in the industrial sector

The ways in which the EU ETS may impact energy efficiency of industry are listed below. The first two, which apply to the industrial sector are directly linked to energy efficiency. Number 3 results from the fuel shift effect only (see discussion further on this links to number 1). Finally, Number 4 comes from the impact on the demand for energy within industry.

Based on the ODYSSEE Indicators the effects 1-3 can be considered in the present analysis while effect 4 cannot be dealt with in the frame of this research. We will briefly discuss this issue based on literature research.

Impacts of the EU ETS in the energy sector

The EU ETS may also have the following impacts in the energy sector (here limited to the power sector). These are all directly linked to energy efficiency or the demand for energy:

The ODYSSEE Indicators can be used to understand all of these effects, except number 8 in the frame of this research. We will briefly relate the results from another work in a later section.

Impacts of the EU ETS in the aviation sector

The EU ETS may have the following impacts in the aviation sector. These are both directly linked to ener¬gy efficiency and the demand for energy:

Based on the ODYSSEE Indicators both the evaluation of the effects 9 and 10 is possible; however, the inclusion of the air transport into the EU ETS only started in 2012 and was finally limited to domestic air transport (i.e. intra-European flights).

The following methodological approach was carried out based on the construction of a counterfactual scenario (i.e. a development of without the introduction of the EU ETS) with the help of a linear regression analysis:

The fuel consumption of these four sub-sectors represents therefore a good proxy for the sources of direct CO2 emissions of the industrial part of the EU ETS. Any improvement in the fuel efficiency of these branches may therefore be linked to the EU ETS. One way of verifying the quality of the proxy is to compare the CO2 emissions calculated from the energy consumption of the above sectors with the emission data published in the European Union Transaction Log (EUTL). There is a reasonable agreement between the two data sets (deviation of 2% in 2019).

Results of the analysis

Table 1 presents a summary of results for the possible impact of the EU ETS on the different effects introdu¬ced in the previous section. For a variety of effects impacts can be identified. It is important to empha¬size that these are maximum effects the EU ETS could have has and that in reality, they will also result from overlap with other factors. In particular promotion schemes for renewables, as well as changing fuel or electricity prices. Impacts in terms of energy savings were converted to CO2 with average emission factors.

The following observations can be made from the analysis of the individual effects:

Table 1: Summary of results for the possible impacts of the EU ETS on the different effects in the period 2005-2019/2020 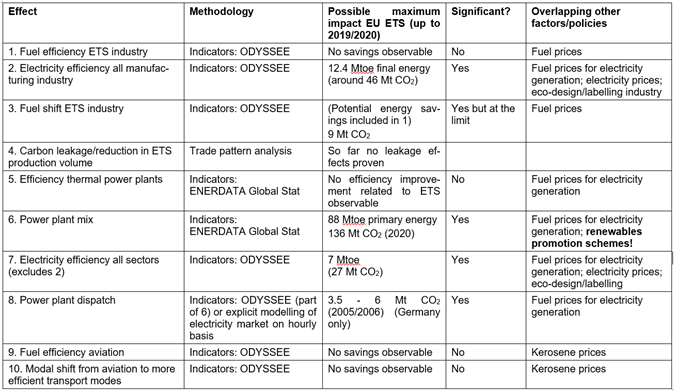 In total, the analysis found maximum energy savings from the EU ETS of around 107 Mtoe and CO2 savings of around 218 Mt CO2 over the period 2005-2019/2020. In terms of the potential for the EU ETS to have delivered these savings, this mainly stems from Effect 6, the power plant mix. Some parts of these savings are, however, not significant or are, with large probability, partially or even largely influenced by other factors. Rather than the EU ETS, it is like that renewables policies or fuel prices were stronger drivers of these savings. With quite some certainty, it can therefore be concluded that these figures are probably largely overestimating the possible impacts of the EU ETS on energy efficiency.

More figures are available in the PDF document. 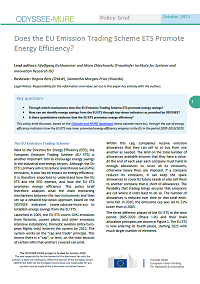