Data from the Odyssee database do not show clear effects of the EU ETS on energy efficiency in industry. This paper explains why this is the case and what can be done to improve the effect of the ETS on industrial efficiency.

Introduction to the EU ETS

The EU ETS consists of different phases. The first phase was a three year pilot period from 2005 to 2007. The second phase covered 2008 to 2012 and coincided with the first commitment period of the Kyoto Protocol. All emission allowances in the first period and 90% of allowances in the second period were handed out for free. Phase three covers 2013 until 2020. In contrast to earlier periods it has a single, EU wide cap instead of national caps and auctioning is the default method for allocating allowances. In practice this applies mainly to power generation, as there is still free allocation for most of industry.

Allowance prices started around 20 euros per ton, peaked in April of 2006 and went down from there until the current level around 5 euro per ton2. The reasons for this development will be discussed further below.

Effects of ETS on sectors covered by Odyssee

The Odyssee database contains data about the energy consuming activities, energy consumption and efficiency indicators of end use sectors. Energy conversion sectors like power plants and refineries are not covered. This means that an analysis of the effects of the ETS by making use of Odyssee data can only address manufacturing industries.

For further analysis, Odyssee data for all manufacturing industries at the EU level combined were used3. Figure 1 shows indices for the production, the final energy consumption and the Odyssee efficiency for the manufacturing industry in the EU. The efficiency index as depicted in Figure 1 has a gradual slope due to the methodology used, among which an averaging over three years.

Figure 1: Indices for production, final energy consumption and efficiency for the manufacturing industry in the EU from 1995 until 2014 (1995 = 100)

For better insight, one can derive an annual energy savings rate from the efficiency index. This rate is displayed together with the emission allowance price in Figure 2. The figure shows that the savings rate peaked at around 2.5% per year during the late nineties and from 2005 until 2007. It also shows that high savings rates have occurred in the nineties, before the start of emission trading.

Investments in industrial equipment usually result in improved energy efficiency. The high savings rate during the late nineties and between 2005 and 2007 are probably related to the high investment levels during these years with high economic growth. The high rate from 2005 until 2007 could also be related to the relatively high allowance price during these years. Although the allowance price still increased during the start of the financial crisis in 2008, savings went down considerably from there because of lower investments in industrial equipment.

Explanation of the limited effect of ETS

Figure 2 shows that allowance prices have started at a relatively high level, and have become very low in recent years. There are multiple reasons for the oversupply that causes the low prices:

Two possible solutions to increase the effect of the ETS on energy efficiency in industry are described in the following. The first is to make sure the allowance price becomes consistently higher. This will ensure that investing in energy efficiency will still be attractive during economic downturns, although the available data give no indication at what price level the effect will become noticeable. The second option is to start from limiting the yearly availability of allowances irrespective of allowance prices. If no allowances are available, no emissions will occur even if the allowance price would still be low. These goals can be achieved in several ways:

An effect of the EU ETS on energy efficiency improvement in manufacturing industry in the 28 EU member states cannot be clearly derived from the data as collected and processed by the Odyssee database. There may have been an effect from 2005 to 2007, but it is highly likely that the economic growth during these years had a larger effect on efficiency improvements than the allowance price, also because the much higher wholesale price of energy had no discernible effect.

To incentivise energy efficiency measures in industrial companies, allowance prices should increase substantially or the yearly availability of allowances should be limited in a gradual and predictable way. The most obvious way to achieve this is to gradually reduce the annual amount of available allowances in a way that is compatible with the goals of the Paris Agreement. Moreover, this will increase the likelihood that this important target will be met. 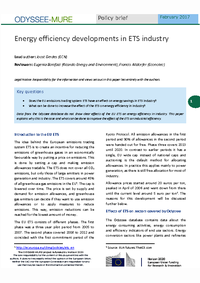