Article 8 of the Energy Efficiency Directive (EED) deals with energy audits, their quality, implementation and the possible actions that arise from the findings of the audit. Energy audits (EAs) should be the first basic step in the efforts of enterprises to tap their energy efficiency potential, hence the importance they are given in the EED. Energy audits provide the knowledge base to ensure that the efforts are meaningful and directed at those areas where they generate most benefits. Article 8 also includes incentives and obligations that can be established by states to incentivise action on the findings of the Energy audits. Under Article 8, energy audits are mandatory for non-SMEs and recommended for SMEs.

Now, five years since the first directive-mandated audits should have been undertaken by non-SMEs, this paper undertakes a review of the activities carried out so far by a number of states to determine how effective audits and related further measures are in furthering Energy Efficiency objectives. Such an exercise could provide an assessment of the adequacy of policy, how to improve matters and render the audit process as efficient as possible.

A questionnaire was circulated to a number of countries, mainly through the European Energy Network1 (EnR) which includes a number of members that are also participating in the Odyssee-Mure project, requesting information on activities within them. Six Member States (MS) responded to the request for input – Austria, Bulgaria, Hungary, Italy, Portugal and Slovakia. These countries together with Malta make up 25% of EU-27’s population and about 20% of its economy.

Review of ongoing activities under Article 8

The review looked at the following aspects:

A questionnaire reflecting the above terms of reference of the inquiry was forwarded to the energy agencies responsible with implementing Art. 8 of the EE Directive in the participating states, asking for input to the above project according to the experiences accumulated. Six countries responded, namely Austria, Bulgaria, Hungary, Italy, Portugal and the Slovak Republic. Malta, as the author of this policy paper, also provided a response which was incorporated in the analysis.

Degree of implementation of Article 8

Article 8 and especially EAs seems to be accepted as a useful tool on the efforts to generate energy efficiency in industry. Indeed, there are cases where EAs had been completed as a result of legislation other than Art. 8.

All the Member States participating in the survey have completed at least the first round of mandatory audits and most have also completed the second.

Two countries (Slovak Republic and Bulgaria) out of the seven specifically report establishing schemes to incentivise and support the implementation of recommendations from the audits. However, all countries have incentives in place to support energy efficiency projects in one form or another.

The responses received clearly show that no state reports ‘no action’ on Article 8.

Figure 1: Status of Implementation of Article 8 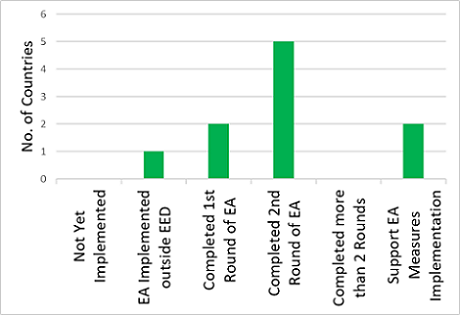 The most important of these incentives is the white certificate system.

Most Member States mentioned grants for EE measures in both SMEs and non-SMEs such as an Operational Program “Innovations and Competitiveness” and Investment aid for energy efficiency projects.

Relevance of these measures for improving energy efficiency

The actions considered were the carrying out of the energy audit (mandatory for non-SMEs, incentivised in the case of SMEs), direct specific action to address inefficiencies identified in EAs, and aspects of Art. 8 other than EAs. The observations forwarded seem to indicate that all are viable and depend on the preferences and choices of Member States.

Indeed, there were also observations on the lines that aspects of Article 8, other than the EA obligation have resulted in a bigger impact on the implementation of EE measures by enterprises, such as voluntary agreements, information campaigns, and tax incentives.

Portugal and the Slovak Republic also commented that it is quite early to assess quantitatively and with certainty the impacts being achieved. The second round has not been carried out in some Member States and the analysis may not have been completed in others.

Some commented on the appropriateness or otherwise of the obligation to undertake energy audits by all non- SME, independently of other more relevant criteria, e.g. energy consumption, whilst a Member State mentioned that they do not collect information on whether measures recommended in an EA were implemented.

All countries who responded to the questionnaire reported benefits through incentive schemes and obligations as follow-ups of EA. In all countries, except one, increased awareness of and/or contribution by enterprises to the achievement of energy targets was observed, while increased competitiveness was reported by three. One particular state reported increased uptake of schemes to support EE measures, presumably because such schemes are normally over-subscribed in most Member States.

Figure 2: Benefits from Implementation of Schemes and Obligations Additions to EA 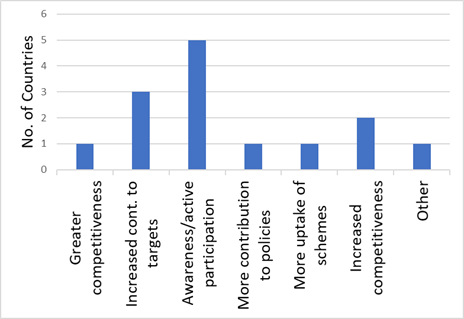 All the Member States responding to the questionnaire are working to improve the effectiveness of EAs, to facilitate implementation and maximise the benefits generated.

The exercise reported in this paper has shown the general acceptance in the participating countries of Art. 8 of the EE Directive and the recognition that incentive schemes and obligations have an important part to play in moving forward efficiency in final energy consumption in the commercial and industrial sectors. The exercise has been useful in showing what is happening in some countries participating in this project. It has also pointed out possible improvements to the Energy Audit obligation.

The next steps in establishing the effectiveness of the obligations and schemes that are being implemented is to carry out further quantitative analysis and correlate the results of the reported initiatives to the achievements of targets and other related issues, such as identifying best practices. However, the biggest challenge to this further analysis is the lack of sufficiently detailed published data, thus requiring further detailed data collection and analysis to be carried out. It would be a fruitful and interesting exercise to establish the real benefits of the various initiatives that are usually implemented and to maximise the benefits from the cumulative experience gathered so far. 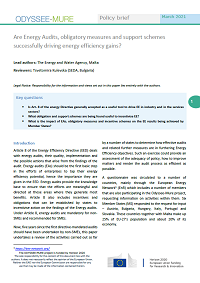