In the Netherlands, there is a long history of using voluntary long-term agreements (LTAs) to achieve energy efficiency improvements. Since 1990, there have been LTAs with industrial companies, profit and non-profit organisations, and horticulture and railway companies. These LTAs operate as part of a framework of other policies and measures such as subsidies, taxation, tax reductions, etc.1. In 2013, over 40 organisations signed up to the ‘Energy Agreement for Sustainable Growth’2 (EASG), laying the foundation for a robust, future-proof energy and climate policy. The EASG requires:

The EMA regulates the environmental impacts of organisations and requires organisations to implement energy savings measures with a payback of 5 years or less If A company with an annual energy use is over 75 000 m3 of natural gas or 200 000 kWh, can also be forced to conduct an inspection for potential energy saving measures, but companies covered by the EU ETS are excluded from this requirement. For many years, the competent authorities (municipalities and regional authorities) did not give priority to enforcing the energy part of the EMA. A more strict application of the EMA could result in primary energy savings of between 17 PJ and 34 PJ (see Table 1). Actual electricity consumption is converted to primary energy (PJprim) by using a conversion factor of 2.5.

Table 1: Potential energy savings due to stronger enforcement of the EMA

While the energy use of companies not participating in the ongoing LTA-3 is much lower than those in LTA-3, the potential overall savings of non-participants are relatively much higher. Indeed, industrial companies participating in LTA-3 had to prepare an Energy Efficiency Plan (EEP) every 4 years, covering all measures with a payback period of up to 5 years. All EEPs were checked by the NL Agency (now RVO.nl) and the follow-up was included in the monitoring of the LTA. Between 2009 and 2012 the companies within the LTA-3 realised about 2/3 of the energy savings that were included in the EEPs.

Progress in implementing activities and relations with existing policies

Two important tools have been developed to help apply the regulations more strictly. The first comprises lists of tailored energy saving measures with a payback period of up to 5 years (‘erkende maatregelenlijsten’). With such lists, it should be easier for a company to research its potential for energy saving measures and for the competent authorities to control whether the companies implemented the affordable measures. Up until now, such lists were only developed for companies outside the industrial sector. The second tool is a new system of Energy Performance Assessment (EPK) – the organisation conducts an energy scan itself or with the help of a private service company or energy adviser. By May 2016, only nine pilot EPKs had been conducted and real implementation is now starting. The EPKs for almost all industrial companies are still being developed. Implementation is expected to take place in late 2017 or early 2018.

About 1 100 organisations, from a wide range of economic activities, participate in LTA-3 and the MEE covenant – the majority being in the industrial sector. Altogether, the participants account for about 25 % of the Netherland’s total energy. The LTA progress report indicated that about 20 % of the participants did not implement the energy savings measures included in their EEPs. Applying regulations more strictly would result in further energy savings.

In 2015, the Government and the companies agreed to tighten the implementation of LTA-3 and the MEE-covenant. For the participating industrial companies, there were two major changes. One relates to the progress check of the implementation of energy savings measures – introducing a declaration of progress – and the other in the control of the EEPs for the period 2017 to 2021.

In 2014 and 2015, 22 and 34 participants respectively did not fulfil their energy saving obligations as specified in their EEPs. Consequently, they did not receive a declaration of progress from RVO.nl. Therefore, these organisations did not fulfil their obligations in the LTAs or the EMA (where applicable) and the competent authorities can take action in line with the EMA. These organisations were not eligible for an energy tax refund as they were unable to provide a declaration of progress. Before 2013, the energy intensive industries had an exemption from the energy tax. This exemption was replaced by a tax return system to ensure that only companies implementing the agreed energy savings measures (and have a declaration of progress) can receive a refund.

In 2016, RVO.nl started to review the draft EEPs for the period 2017-2021. The procedures for this were tighter than before. Some examples of the change in procedures are following. The checklists have been improved and now include measures that other companies within a particular sector have taken. If an industrial company has not taken a particular measure before, it must demonstrate that it is considering it in the new EEP or provide reasons why it is not planning to include it. The EEP will be reviewed based on the assumption that a balanced set of three types of measure should be incorporated: affordable ones, conditional ones and provisional ones. If measures with a payback period up to 5 years (affordable) are included as ‘conditional’, the reasons for this will be questioned by RVO.nl. EEPs that have only conditional and/or provisional measures will no longer be approved. Up to the end of 2016, companies covered by the EU ETS researched in cooperation with the Ministry of Economic Affairs how to add company-specific agreements for energy savings to the MEE covenant. However, only three such agreements were realised. With these agreements, the target of an additional 9 PJ of energy savings, as stated in the EASG, would not be realised. Therefore, at the end of 2016, the Minister of Economic Affairs informed the Dutch Parliament that he was preparing an obligation scheme for the individual companies in the MEE covenant that would start on 1 January 2018. Consultations on such a scheme are ongoing. It is also not clear what the consequences will be for the MEE covenant.

Each year since 2014, the state of the Dutch energy system has been summarised in National Energy Outlooks (NEVs). Inputs for analysis in the 2016 NEV are, among others, monitoring activities for the LTA-3 and MEE covenant, the evaluation of the EASG in 2016 and the evaluation of the EPK pilots. The 2015 and 2016 NEVs3 state that, by 2020, the improvements in the MEE covenant and those in LTA-3 are estimated to be at least at the target level of the EASG (see Table 2). Depending on the implementation of the actions, the savings might be even higher – up to 1.7 PJ for the MEE-covenant and 1.3 PJ for LTA-3.

Due to the more strict control of the EMA in industrial companies, it is expected that the savings by 2020 will be in line with the lower level of the target in the EASG. As the pilots of the EPK are finalised and those for most of the industrial companies are under development, the expected savings in industry by 2020 are up to 5.5 PJ (in the 2016 NEV). Since there were just three company-specific agreements signed in 2016, there are no savings yet and the expected savings by 2020 will not be higher than 1.3 PJ The 2016 NEV estimated zero savings as a result of the improvements in the LTA and the company-specific agreements. If the EMA was more strictly applied, it is anticipated that some savings could be achieved (see Table 3).

For the participants in the Dutch industrial Voluntary Agreements (LTA-3 and MEE covenant), the implementation of the EASG has, since 2014, resulted in a more strict control of the implementation of energy saving measures as included in EEPs. Consequently, 22 participants in 2014 and 34 in 2015 did not receive a declaration of progress. This is less than 5 % of the participants – in 2013, about 20 % of the participants did not implement energy savings measures as included in their EEPs. It is not known if the competent authorities took action in line with the EMA against the companies that did not receive a declaration of progress. By 2016, no additional energy savings as result of these actions are foreseen, but for the year 2020 it is expected that additional saving will be between 1 PJ and 3 PJ, while the target was 0.8 PJ. The more strict control of EMA has not resulted in high additional energy savings – for the year 2016 less than 0.5 PJ is estimated. However, the projections for 2020 show the lower level of the target of 1 PJ will be reached and may be as high 5.5 PJ. While it seems that the ex-ante energy savings targets were not too optimistic compared with the indicated potential of between 9 PJ and 17 PJ, the foreseen results are modest. 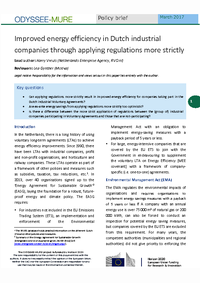