Home > Publications > Policy briefs > Opportunity of DAFI to ensure a more efficient and sustainable transport in the EU. The Spanish case.

The transport sector in the EU accounted for 33.2% of final energy consumption (353 Mtoe) ahead of the industrial or residential sectors. This consumption is characterised by an almost exclusive dependence on oil products. Road transport, in particular, accounts for 82.1% of the overall energy consumption of the transport sector and oil products account for 94.6% of this. Road transport contributes to a large extent to the high energy dependence in the EU, at around 53.5% in 2014.

This dependence on petroleum generates a structural deficit which in 2012 amounted to a record figure of €337.9 billion, or almost 2.5% of the EU GDP, which negatively affects the competitiveness of the European economy. This increases its vulnerability to the uncertainties associated with price fluctuations and geopolitical tensions linked to supply regions and to the financial markets. Another concern arises from the environmental effects caused by transport, among which are the GHG emissions – of which transport is responsible for 23.2% – and local air quality issues. This shows the need to reinforce energy diversification in order to guarantee the security of energy supply and to reduce energy imports. The development of alternative fuels is one solution to this problem, while it contributes to mitigating the environmental impact of this sector. According to estimates of the European Commission1, the progressive use of alternative fuels in transport could lead to a potential accumulated saving of €9.3 billion in the EU energy bill by 2030. However, the lack of a harmonised infrastructure at European level for the use of these fuels is a barrier to their development as well as a delay in achieving the expected environmental benefits. Thus, the EU adopted a strategy for clean transport – the Clean Power for Transport Package -, which resulted in the Directive for Alternative Fuels Infrastructure, 2014/94/EU (DAFI). This fosters the use of alternative energies in transport by establishing a common framework for implementing the required infrastructure.

Synergy with other EU policies

This measure is complemented by other initiatives concerning energy and environmental policies which may affect the transport sector, such as;

The implementation of the DAFI should accelerate the transition towards low-carbon transport technologies, which, in turn, will facilitate compliance with the Community objectives linked to Directives 2009/28/EU (RED) and 2012/27/EU (EED), contributing to the objectives assumed by the EU within the Paris Agreement framework.

Key points of the DAFI

Transport is the highest energy-consuming sector in Spain, accounting for 40.4% of the final energy demand in 2014. Road transport accounts for 81.3% of transport energy demand and is dominated by oil products (80.7%) the majority of which is imported (96.1%). This explains the high energy import dependency in Spain of around 71% in 2014, above the European average, which places it among the 8 most energy import dependent countries in the EU. This dependence affected the trade balance negatively to the tune of approximately €40 billion in 2014, equivalent to 3.8% of GDP, (higher than the EU as a whole at 2.5%), with all the problems this involves for the economy, environment and energy security.

In order to alleviate these effects, the transport sector is a strategic target for many energy and environmental policies, with special attention dedicated to private cars, buses and trucks, which account for the greatest share of road transport consumption.

The use of alternative fuels in transport is one instrument with which to offset the negative impacts of transport and contribute to Spain’s energy and environmental policies. It also presents a business opportunity for the Spanish automotive industry, where Spain already occupies a leading position in the EU market as the second largest manufacturer of light vehicles and the first in industrial vehicles in the EU market.

Since the publication of the DAFI, Spain approved the Strategy for Boosting Alternative Energy (VEA) in 2015. A further step involves the recent approvals by Royal Decree 639/2016 on the alternative fuels infrastructure and of the National Action Framework for the development of the market and the infrastructures for alternative fuels in the transport sector (MAN) through which this Directive is transposed. The MAN involves a wide package of measures in order to guarantee compliance with the objectives assumed in the DAFI context, which at present in Spain are mainly aimed at road and sea transport. In general, the measures are structured around 3 priority axes: market, infrastructure and industrialisation. These are linked through a fourth axis – a stable regulatory framework – which provides continuity to the actions undertaken, allowing guarantees to be offered to the market and investors. Most measures are aimed at the transport sector.

The analysis of the starting situation regarding the existing market and infrastructure in relation to alternative fuels shows a better positioning in road transport, with a varied number of factories which produce alternative fuels vehicles, besides companies manufacturing equipment for recharging infrastructure. As regards electric mobility on the road, although the current registration of electric vehicles remains negligible (< 1% of the registrations), the numbers are increasing. As a result of the VEA Strategy and the MAN measures, it is foreseen that the Spanish fleet will reach 150,000 electrical cars in 2020. Spain has an extensive recharging infrastructure in the metropolitan areas between 1 and more than 5 million inhabitants. Beyond the urban areas, Spain and Portugal have promoted a consortium (CIRVE project) for the implementation of rapid recharging points along the Atlantic and Mediterranean corridors.

As concerns natural gas, 90% of the CNG vehicles are concentrated on public services fleets. In the segment of light vehicles, the penetration of CNG taxis is increasing in some metropolitan areas. LNG is an alternative to diesel for long haul road transport. However, its penetration in this transport segment is still small.

As regards the obligations for LNG and CNG refuelling infrastructure for trucks along the TEN-T core network in 2025, it can be stated that with the existing stations and those in construction, and with the interest of private investors in constructing additional stations, Spain is in a good position to comply with the DAFI.

In the case of hydrogen, the vehicles fleet is limited to demonstration projects. In addition to this, Spain has 6 hydrogen stations in operation. Further development is expected from the POCTEFA-INTERREG initiative within the framework of the H2PiyR project, through which a hydrogen corridor will be created in the Pyrenees, with the construction of 4 new hydrogen stations in Spain. It is considered to be feasible to reach an approximate fleet of 500 Fuel Cell Electric Vehicles (FCEV) vehicles in 2020 with an infrastructure of 20 stations.

As regards sea transport, Spain is in an optimum position for developing the new LNG market, due to its geostrategic situation as a logistic platform of Southern Europe, its existing infrastructures and its experience acquired regarding LNG storage and transfer. In addition, Spain has the longest coastline (8,000 km) in the EU which has enabled it to develop an integrated State port system of 43 operative ports of general interest, 13 of which form part of the TEN-T core network.

Spain has 932 active LNG satellite plants, which are complemented by 250 tanker trucks. Therefore, LNG is being currently supplied in the seaports and in the inland ports of the TEN-T core network, as required by the DAFI. The demand forecasts for LNG for the sea transport are subject to uncertainties. The Ministry of Development has fostered the CORE LNGas Hive Project, within which it is intended to execute 11 pilot actions between 2015 and 2020 with a cost of €24.4 million. This will allow studying the feasibility of the different technologies for supplying ships. The objectives established in sea transport by now refer to the identification of ports of general interest where it will be possible to supply LNG through tanker trucks (52 ports in 2025).

With regard to the electricity connection of moored ships, it is estimated that in Spain it would be possible to replace 100,000 tons of conventional fuel by 600 GWh of electricity consumption, which would contribute to the RED objective. The MAN establishes an objective of 5 ports in 2020 (2 of the general network and 3 of the TEN-T core network) with electricity supply.

As regards the use of electric power in air transport, the level of the provision of electricity supply units to aircraft is 90% in the TEN-T core network airports and 38% in the airports of the network. It is forecast that in the 2016-2030 period there will be an investment of €15.17 million in 205 supply installations at 400 Hz in 13 Spanish airports.

Implications of DAFI for energy efficiency 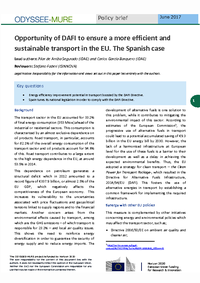