The average energy consumption in the EU is 1.3 toe/dwelling in 2018. There are large disparities between countries, even after adjustment to the same climate, ranging from 0.9 toe/dwelling in Portugal to 2.5 toe/dwelling in Luxembourg. This unit consumption has been decreasing in most countries since 2000 (- 1.1%/year at EU level), except in Bulgaria, Poland, Hungary, and Italy (Figure 2).

Between 2000-2019, downward trends are observed for space heating, the dominant end-use with 66% of the household consumption, and cooking (only 5% of the total) (consumption decreases by -0,5/%year and -0.3%/year for space heating and cooking respectively). Over the same period, increasing trends are observed for household appliances (2.5%/year) and water heating (0.2%/year increase in consumption).

In 2019, appliances have almost overtaken water heating and now account for 13% of household consumption, against 14% for water heating (Figure 3).

Figure 3: Household energy consumption by end-use in the EU

Electricity accounts for almost half of the total energy consumption of services. Offices and trade wholesale and retail) consume around 2/3 of electricity in services1 at EU level. 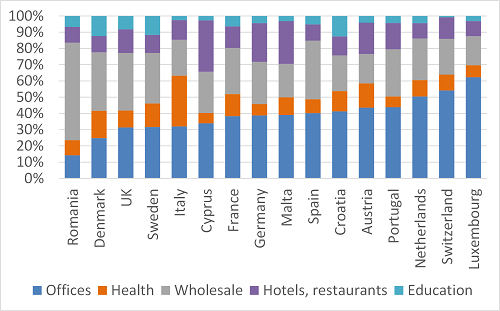 The specific consumption of households for heating has decreased in almost all countries since 2000 (- 1.8%/year on average in the EU). The reduction was above 3%/year in Latvia and Romania and between 2 and 3%/year in 7 other countries (France, Germany, Ireland, Netherlands, Portugal, Spain, and Sweden) (Figure 5).

The specific consumption of large appliances (measured in kWh per appliance) has decreased steadily since 1990 thanks to labelling and eco-design regulations (Figure 6). 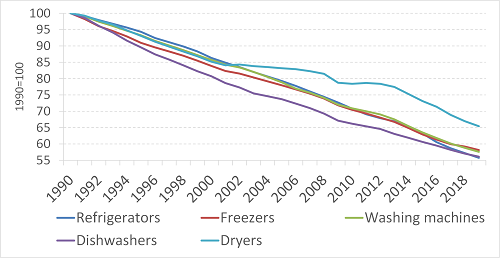 Efficiency gains are above 40% (i.e., around 3%/year) for cooling appliances (refrigerators and freezers), washing machines and dish washers; for tumble dryers, gains are slightly lower, around 35% (Figure 6).

Figure 7: Trends in household energy efficiency at EU level, according to ODEX

However, a significant slowdown has been observed since 2014: the reduction in ODEX has been twice lower, mainly because limited efficiency gains in space heating efficiency (the largest end-use), and, to a lower extent, water heating and cooking. The downward trends of energy efficiency observed for these end-uses were not offset by the larger efficiency gains for large appliances and lighting (Figure 7).

Between 2014 and 2019, the household consumption has decreased by 28 Mtoe. Increases in housing stock and more consuming lifestyles have contributed to an increase in consumption of 15 Mtoe. Energy savings have more than offset this increase by reducing consumption by 23 Mtoe. The warmer climate in 2019 further reduced consumption by 17 Mtoe (Figure 8). 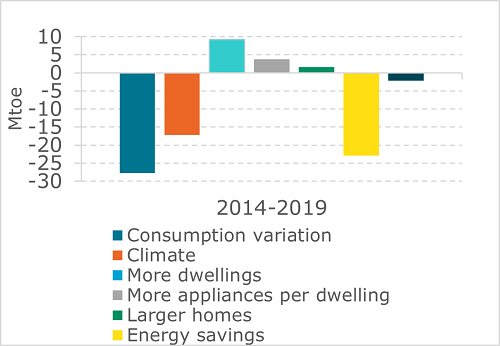 For services, the activity contributed to increase consumption by 18 Mtoe. Energy savings and productivity gains offset this increase by reducing consumption by 24 Mtoe (Figure 9).

Figure 9: Drivers of energy consumption in services at EU level 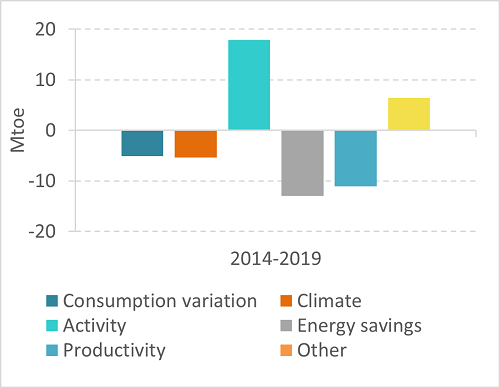 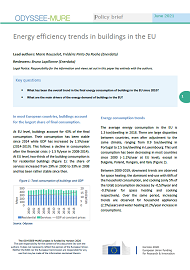