This report proposes an evaluation of energy efficiency progress achieved in industry since 2000 at EU level. The analysis includes both a review of energy efficiency trends and of the policy instruments currently implemented to improve energy efficiency. The analysis is based on the information containing in the ODYSSEE and MURE databases.
With the Energy Efficiency Directive from 2012 (2012/27/EU) the Member States are obliged to meet their national energy efficiency target set in Article 3 EED and the 1.5% energy saving target from Article 7 of the EED. The EED also includes specific regulations for this sector, especially Article 8 on energy audits. The achievement of the new 2030 target for energy efficiency, which prescribes a reduction of primary energy consumption by 27% compared to a reference development, will also need contributions from all end-use sectors.

Energy Efficiency Policies in Industry in the EU: September 2012 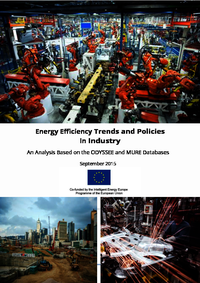