This report proposes an evaluation of energy efficiency progress achieved in buildings since 2000 at EU level. It also looks at the success and failures of the implementation of EU Directives and national energy efficiency policies and measures.
The economic crisis has however lowered slowed down the energy savings. Consequently, the pace of energy efficiency improvements at EU level has slowed down from an average rate of 1.9%/year from 2000 to 2008 to 1.5%/year between 2008 and 2013.
Although EU legislation is a major driver of the policies and measures implemented in buildings, further attention to the implementation of EU legislation is needed in several areas: building renovation strategies; energy certificates and public procurement.

Trends in the Tertiary Sector

Energy Efficiency Policies in Buildings in the EU: November 2012 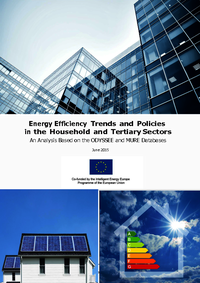